Eat Like a Pig, Run Like a Horse: How Food Fights Hijacked Our Health and the New Science of Exercise (Hardcover) 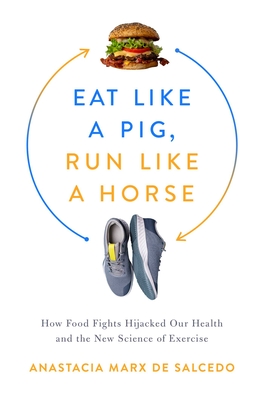 Eat Like a Pig, Run Like a Horse: How Food Fights Hijacked Our Health and the New Science of Exercise (Hardcover)


On Our Shelves Now at:
There is no magic pill. There is no perfect diet. Could it be that our underlying assumption—that what we’re eating is making us fat and sick—is just plain wrong?

To address the rapid rise of “lifestyle diseases” like diabetes and heart disease, scientists have conducted a whopping 500,000 studies of diet and another 300,000 of obesity. Journalists have written close to 250 million news articles combined about these topics.

Yet nothing seems to halt the epidemic. Anastacia Marx de Salcedo’s Eat Like a Pig, Run Like a Horse looks not just to data-driven science, but to animals and the natural world around us for a new approach. What she finds will transform the national debate about the root causes of our most pervasive diseases and offer hope of dramatically reducing the number who suffer—no matter what they eat.

It all began with her own medical miracle—she has multiple sclerosis but has discovered that daily exercise was key to keeping it from progressing. And now, new research backs up her own experience. This revelation prompted Marx de Salcedo to ask what would happen if people with lifestyle illnesses put physical activity front and center in their daily lives?

Eat Like a Pig, Run Like a Horse takes us on a fascinating journey that weaves together true confessions, mad(ish) scientists, and beguiling animal stories. Marx de Salcedo shows that we need to move beyond our current diet-focused model to a new, dynamic concept of metabolism as regulated by exercise. Suddenly the answer to good health is almost embarrassingly simple. Don’t worry about what you eat. Worry about how much you move.

In a few years’ time, adhering to a finicky Keto, Paleo, low-carb, or any other special diet to stay healthy will be as antiquated as using Daffy’s Elixir or Dr. Bonker’s Celebrated Egyptian Oil—popular “medicines” from the 1800s—to cure disease. And just as the 19th-century health revolution was based on a new understanding that the true cause of malaria, tuberculosis, and cholera was microorganisms, so the coming 21st-century one will be based on our new understanding that exercise is the only way to metabolic health. Fascinating and brilliant, Eat Like a Pig, Run Like a Horse is primed to usher in that new era.
Anastacia Marx de Salcedo is a nonfiction writer whose work has appeared in the Atlantic, Salon, Slate, Vice, and on PBS and NPR blogs. She has worked as a public health consultant, news magazine publisher, and public policy researcher. She is the author of Combat-Ready Kitchen: How the U.S. Military Shapes the Way You Eat, also published in Spanish, Japanese, and Chinese, and lives in Boston, Massachusetts. Visit AnastaciaMarxdeSalcedo.com.
Advance praise for Eat Like a Pig, Run like a Horse:

"The thesis of this book is sound: regular physical activity is more important for good health and longevity than your weight and diet. Marx de Salcedo denounces 'the false prophets of diet-focused health.' She constructs her case for exercise's crucial role in interviews with researchers and experts and briefly reviews relevant information on nutrition, metabolism, and aerobic fitness...As a population, we generally move much too little and eat too copiously, an unfortunate formula for developing chronic diseases and shortened lives. Regular exercise enhances physical and mental health. The benefits of simply moving your body are potentially life-changing."
— Booklist

“We wouldn’t eat the way we do, Anastacia Marx de Salcedo argues, if it weren’t for the Army.  She has a fascinating tale to tell—of technology and ingenuity—before arriving at her doubts. The reader of Ms. Salcedo’s chronicle is likely to look at our daily fare with a fresh sense of appreciation.”
— The Wall Street Journal

“A rollicking, yet encyclopedic, look at the Army's role in everything from industrialized meats to energy bars."
— VOX

“A well-researched effort that will undoubtedly add to general readers' knowledge about the food they consume on a daily basis.”
— Kirkus Reviews

“Ever wonder why you can buy frozen pizza that stays “fresh” for five-plus months? Thank the U.S. military, which has outsize influence on the contents of our modern-day grocery carts, writes Anastacia Marx de Salcedo.”
— TIME