Be Brave (The Dalai Lama’s Be Inspired) (Paperback) 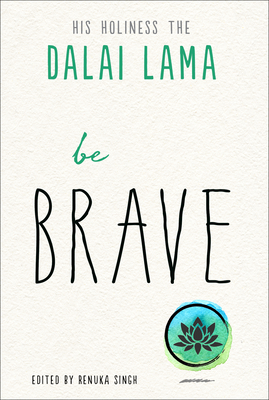 Be Brave (The Dalai Lama’s Be Inspired) (Paperback)

“We must think globally, but act locally.” —His Holiness the Dalai Lama

Simple and accessible wisdom from His Holiness the Dalai Lama on how we are human, how we are not alone, and how we must help each other.

A global pandemic has revealed to us how the world can be shaken up within a very short period. Such a crisis—experienced by all humans on the earth—has given rise to uncertainty, fear, anxiety, loneliness, and depression. As societies and nations struggle to come to terms with and contain it, economic breakdown, migration, environmental crises, and a dwindling spirit stare us in the face. In this climate, His Holiness the Dalai Lama is calling upon us to be brave—to have the courage to step up to the recognition that we are all part of the same global community.

His Holiness reminds us that it takes courage to give up our self-centered sense of individuality; it takes courage to find a sense of oneness with seven billion human beings. Bravery is admitting that we are not alone, and that without community we cannot survive. In Be Brave, His Holiness the Dalai Lama teaches us that practicing compassion and cultivating peace of mind are the paths to inner strength, peace, clarity, and happiness.

Tenzin Gyatso, His Holiness the 14th Dalai Lama, is the exiled spiritual leader of the Tibetan people. As an advocate of world peace, he has received many honors, including the Nobel Peace Prize in 1989.