The Sinking Middle Class: A Political History of Debt, Misery, and the Drift to the Right (Paperback) 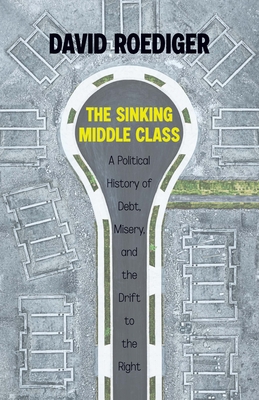 The Sinking Middle Class: A Political History of Debt, Misery, and the Drift to the Right (Paperback)


In Stock—Click for Locations
The Sinking Middle Class challenges the "save the middle class" rhetoric that dominates our political imagination. The slogan misleads us regarding class, nation, and race. Talk of middle class salvation reinforces myths holding that the US is a providentially middle class nation. Implicitly white, the middle class becomes viewed as unheard amidst supposed concerns for racial justice and for the poor. Roediger shows how little the US has been a middle class nation. The term seldom appeared in US writing before 1900. Many white Americans were self-employed, but this social experience separated them from the contemporary middle class of today, overwhelmingly employed and surveilled. Today's highly unequal US hardly qualifies as sustaining the middle class. The idea of the US as a middle class place required nurturing. Those doing that ideological work--from the business press, to pollsters, to intellectuals celebrating the results of free enterprise--gained little traction until the Depression and Cold War expanded the middle class brand. Much later, the book's sections on liberal strategist Stanley Greenberg detail, "saving the middle class" entered presidential politics. Both parties soon defined the middle class to include over 90% of the population, precluding intelligent attention to the poor and the very rich. Resurrecting radical historical critiques of the middle class, Roediger argues that middle class identities have so long been shaped by debt, anxiety about falling, and having to sell one's personality at work that misery defines a middle class existence as much as fulfillment.
David Roediger teaches in American Studies, History, and African and African American Studies at the University of Kansas. His recent books include How Race Survived United States History and Class, Race, and Marxism.