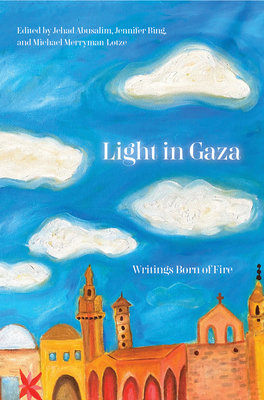 
On Our Shelves Now at:
Imagining the future of Gaza beyond the cruelties of occupation and Apartheid, Light in Gaza is a powerful contribution to understanding Palestinian experience.

Gaza, home to two million people, continues to face suffocating conditions imposed by Israel. This distinctive anthology imagines what the future of Gaza could be, while reaffirming the critical role of Gaza in Palestinian identity, history, and struggle for liberation. Light in Gaza is a seminal, moving and wide-ranging anthology of Palestinian writers and artists. It constitutes a collective effort to organize and center Palestinian voices in the ongoing struggle. As political discourse shifts toward futurism as a means of reimagining a better way of living, beyond the violence and limitations of colonialism, Light in Gaza is an urgent and powerful intervention into an important political moment.
Jehad Abusalim is the Education and Policy Associate of the Palestine Activism Program at the American Friends Service Committee. He is completing his PhD in the History and Hebrew and Judaic Studies joint program at New York University. His main area of research is Palestinian and Arab perceptions of the Zionist project and the Jewish question before 1948. An accomplished speaker and writer, Jehad combines his passion for history with his commitment to activism and policy change work. Jehad's family continues to live in Gaza.Jennifer Bing has worked with AFSC's Palestine-Israel Program since 1989. Based in Chicago, she organizes events, national speaking tours, exhibits and trainings, and coordinates AFSC's education and advocacy work on the campaigns Israeli Military Detention: No Way to Treat a Child and Gaza Unlocked. In this role, she works closely with faith organizations and human rights groups throughout the U.S. Jennifer has appeared in numerous media outlets including Truthout, Worldview/WBEZ, Mondoweiss, Electronic Intifada, Alternet, Chicago Tribune, Chicago Reader, Friends Journal, and The Washington Post. She is also a regular contributor to AFSC's Acting in Faith and News and Commentary blogs. Jennifer is a Quaker and an active member of the Quaker Palestine Israel Network.Mike Merryman-Lotze is the American Friends Service Committee's Palestine-Israel Program Director. He coordinates AFSC's Israel and Palestine focused advocacy and policy programming, working closely with AFSC's offices in Jerusalem, the West Bank, Gaza, and throughout the US. From 2000 through 2003 Mike worked as a researcher with a human rights organization in the West Bank, and from 2007 through 2010 he worked in Save the Children UK's Jerusalem office managing child rights and child protection programming. Between these two experiences he worked for an international development NGO managing community and local government development programs in Lebanon, Jordan, and Yemen.