Struggle Makes Us Human: Learning from Movements for Socialism (Paperback) 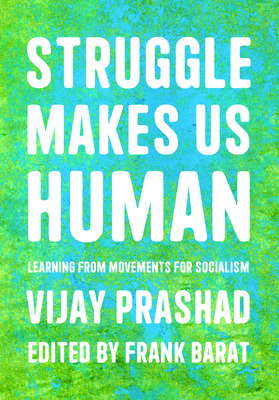 Struggle Makes Us Human: Learning from Movements for Socialism (Paperback)

An incisive and inspiring call to look beyond capitalism to chart a road map for a planet ravaged by pandemics, climate crisis, and wars.

Prompted by trenchant questions by international solidarity organizer Frank Barat, renowned author and activist Vijay Prashad shows that the path toward hope and liberation lies in looking closely at myriad, under covered struggles being waged all across the world by workers in countries such as India, Kenya, Peru, Tunisia, and Argentina. A marvelously global but grassroots perspective.

Vijay Prashad is an Indian historian and journalist. Prashad is the author of thirty books, including Washington Bullets, Red Star Over the Third World, The Darker Nations: A People's History of the Third World and The Poorer Nations: A Possible History of the Global South. He is the Chief Correspondent for Globetrotter and a Columnist for Frontline (India). He is the Chief Editor of LeftWord Books (New Delhi). He has appeared in two films - "Shadow World" (2016) and "Two Meetings" (2017). Frank Barat is a human rights activist and author. He was the coordinator of the Russell Tribunal on Palestine and is now the president of the Palestine Legal Action Network. His books include Gaza in Crisis, Freedom is a Constant Struggle and We Still Here.