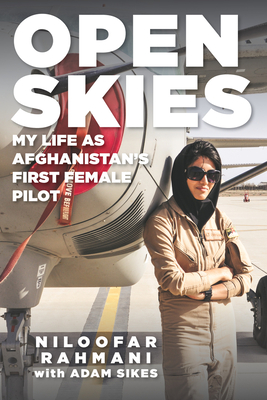 
Not Yet Published—Pre-Order Now
Niloofar Rahmani was born in 1991 in Kabul, Afghanistan, just a few years after the Soviets left. During the rise of the Taliban, her father took his young family to Pakistan, where they lived for nine years as refugees. Then, after the 9/11 terrorist attacks and the international coalition’s invasion, the Rahmani family returned to their home in Kabul. In 2010, for the first time since the Soviets, Afghanistan allowed women to join the armed forces, and Niloofar entered Afghanistan's military academy. However, the professed openness of the new Afghan military could not surmount centuries of chauvinism. Niloofar had to break through social barriers to demonstrate confidence, leadership, and decisiveness—essential qualities for a pilot. Against the odds, Niloofar performed the first solo flight of her class—ahead of all her male classmates—and in 2013 became Afghanistan's first female fixed-wing air force pilot. Yet some Afghan soldiers refused to fly with her, while others disparaged and harassed her. In 2014 the Taliban threatened Niloofar, her father lost his job, and extended family members disavowed them. The US State Department honored Niloofar with the International Women of Courage Award and sent her to the United States to meet Michelle Obama and fly with the US Navy's Blue Angels. But when she returned to Kabul, the danger to her and her family had increased significantly, forcing them to move every few months. In 2015 the US military brought Niloofar back to the US to learn to fly C-130s, but before graduation she learned she couldn't go home, and requested political asylum. She was granted US asylum in 2018.
Niloofar Rahmani became the first female fixed-wing pilot for the Afghan Air Force in 2012. She speaks three languages and has been interviewed for the Wall Street Journal, the Independent, and PBS as well as by Anderson Cooper and Jake Tapper. In 2015 the US State Department presented Rahmani with the International Women of Courage Award. She lives in the southeastern United States. Adam Sikes is a decorated US Marine veteran and freelance writer.
“Niloofar Rahmani’s story would be remarkable anywhere. But set as it is in Afghanistan, it soars beyond. Not only was her epic struggle to prove her worth as a fighter pilot compounded by intense threats from the Taliban, but she found little support from the men who should have been her brothers in arms. Her story of perseverance and triumph will be an inspiration not only for women but for anyone striving to achieve a difficult goal in the face of opposition.” —Jim DeFelice, coauthor of American Sniper, Code Name: Johnny Walker, and Every Man a Hero

★ "A highly readable memoir for older teens researching the fight for women's rights around the world or looking for inspiration." —Booklist, starred review

★ “Delivered with compassion and courage, Rahmani’s heart-racing account will leave readers gripping their seats. This is a vital work of the highest order.”—Publishers Weekly, STARRED

★ “Not simply an inspiring title, this is a memoir of devastation and determination that brings the country’s trials into sharp focus." —Booklist, starred review