Giovanni's Ring: My Life Inside the Real Sopranos (Paperback) 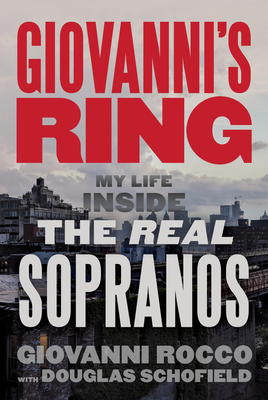 Giovanni's Ring: My Life Inside the Real Sopranos (Paperback)

By Giovanni Rocco, Douglas Schofield (With)

Giovanni spent nearly three years working his way into the DeCavalcante hierarchy. He was so convincing in his role that capo Charlie “the Hat” Stango (also known as Charlie “Beeps”) began to treat him as his “right hand.” Over time, the personal relationship between the two men grew to a point where Charlie treated Giovanni more as a favored son than just an associate. Giovanni became so fully trusted that Stango went “on the record” for him with the family’s administration and put him in charge of his own crew. Giovanni was permitted to attend meetings with other high-ranking members of the DeCavalcante crime family, as well as with senior members of New York’s notorious Gambino, Genovese, and Lucchese Mafia families, and was authorized to speak on his capo’s behalf. Each passing day became a roll of the dice for Giovanni, plaguing him with doubts: Is today the day my cover is blown? Is this the last day I see my wife and children? Will one of my deals between families or crews go bad and I’ll get clipped? Is this all worth it?

Stango eventually assigned Giovanni the task of killing Luigi “the Dog” Oliveri, a troublesome made member of the crime family. That lethal assignment brought the undercover operation to an end in March 2015, and the resulting string of high-profile arrests eviscerated the criminal organization. In the course of the operation, Giovanni secretly recorded hundreds of conversations relating to a wide range of crimes including counterfeit and contraband goods trafficking, warehouse robberies, truck hijackings, and drug trafficking. Also, and importantly for his own safety, he learned that the DeCavalcante family had secured access to sensitive law enforcement information, including information about specific investigations into DeCavalcante members and associates.

Giovanni’s Ring is not simply a chronicle of Giovanni Rocco’s adventures in the murky and dangerous Mafia world he inhabited, but also a fascinating window into the psychological struggles that such a life inevitably entails. Whenever Giovanni returned to his real home and his real family, he needed to perform an invariable ritual: he parked in his driveway, removed his jeweled pinky ring, and dropped it in a cup holder, trying to drop the Gatto identity as well. Giovanni’s Ring is a story that is by turns astonishing, electrifying, gut-wrenching, and always deeply human.

Giovanni Rocco was an undercover law enforcement officer for twenty-six years. Giovanni retired from law enforcement and moved his family to a location that remains undisclosed. Douglas Schofield is a criminal trial lawyer and the author of several novels.
“Very few undercover agents (UCAs) have been able to successfully infiltrate the inner sanctum of Cosa Nostra. Giovanni Rocco is one of those UCAs. This page-turner is a must read if you want to experience Giovanni's dangerous and oftentimes violent journey inside the real-life Sopranos.” —Joaquin “Jack” Garcia, retired FBI UCA and author of Making Jack Falcone

“Once again truth trumps fiction in this riveting account of an undercover cop from New Jersey burrowing deep into the confidence of mob killers and made-men straight out of Hollywood Central Casting. Giovanni Rocco, himself a product of the streets of Bayonne, risks his marriage and family spying for the FBI on an assignment where a mere slip of the tongue or discovery of his hidden recorders could kill him. From page one of Giovanni’s Ring, the jeopardy is constant, the stakes high, and the prose pure Jersey.” —William C. Rempel, author of At the Devil’s Table

“This account of Giovanni Rocco’s many years’ work to infiltrate the ranks of the Jersey Mob drips with authenticity and crackles with tension from the first page to the last. But what sets it apart is Rocco’s unflinching honesty concerning the cost of such work to his family, his marriage, and, ultimately, his very soul. You will likely read this at an unbroken gallop, just as I did.” —Les Standiford, author of Bringing Adam Home

"Giovanni Rocco and Doug Schofield tell a terrific, fast-paced story about Giovanni's undercover penetration of the DeCavalcante crime family. But what makes the book compelling and different than other Mafia tales is the often chilling incidents in which Giovanni found himself close to being exposed by the Mob, and the psychological torment that put him and his family through. Giovanni's Ring is a great crime story about a man who rose from the streets of New Jersey to help destroy a notorious crime family." —Anthony M. DeStefano, author of The Deadly Don

“Rocco conveys the frustrations of his double life poignantly throughout this revelatory read, a captivating true-crime thriller from start to finish and a new gem for Mafia book fans.” —Booklist

“Fans of the Netflix docuseries Fear City, the films Donnie Brasco and The Irishman, or Selwyn Raab’s Five Families will enjoy this insider’s update on of one of the original Italian American crime families.” —Library Journal