A Mythic Obsession: The World of Dr. Evermor (Paperback) 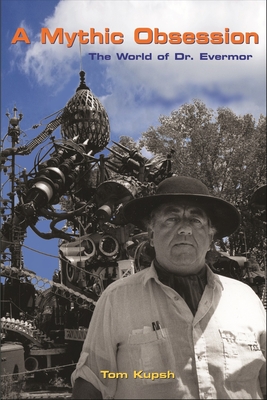 A Mythic Obsession: The World of Dr. Evermor (Paperback)

In addition to hundreds of whimsical welded sculptures, Tom Every poured most of his effort into the Forevertron, the world’s largest sculpture built by a single person, and in the process, he discovered his alter ego: Dr. Evermor. With the full participation of Tom and Eleanor Every, Every’s amazing life is keenly documented, including never published family photos, sketches, and personal memories, producing a detailed portrait of a unique self-taught artist. From a very early age, Every collected, modified, and resold cast-off industrial material. His work as a salvager led him to Alex Jordan Jr., creator of the House on the Rock. When the time is right (and only Dr. Evermor will know when) the famous, enigmatic scientist will climb the winding staircase of the Forevertron and enter its egg-shaped travel chamber, power up the dynamos and flip on the thrusters, and fly away on a “highball to heaven,” propelled by an electromagnetic lighting force beam. Or so the story goes. Anyone who has spent time at the elaborate visionary environment created by Tom Every has heard some variation of the Evermor myth. Lesser known is the story behind the story, the fascinating history of this one-of-a-kind creative spirit.

Tom Kupsh originally met Tom Every in the 1970s, and they reestablished their friendship years later. He is the former creative director for House on the Rock and lives in southern Wisconsin.