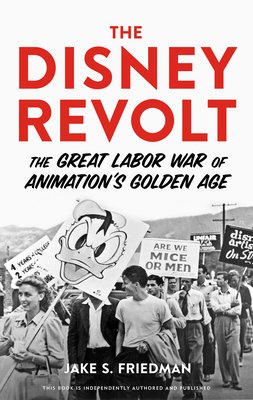 
Not On Our Shelves—Ships in 1-5 Days
An essential piece of Disney history has been unreported for eighty years.

Soon after the birth of Mickey Mouse, one animator raised the Disney Studio far beyond Walt’s expectations. That animator also led a union war that almost destroyed it. Art Babbitt animated for the Disney studio throughout the 1930s and through 1941, years in which he and Walt were jointly driven to elevate animation as an art form, up through Snow White, Pinocchio, and Fantasia.

But as America prepared for World War II, labor unions spread across Hollywood. Disney fought the unions while Babbitt embraced them. Soon, angry Disney cartoon characters graced picket signs as hundreds of animation artists went out on strike. Adding fuel to the fire was Willie Bioff, one of Al Capone’s wiseguys who was seizing control of Hollywood workers and vied for the animators’ union.

Using never-before-seen research from previously lost records, including conversation transcriptions from within the studio walls, author and historian Jake S. Friedman reveals the details behind the labor dispute that changed animation and Hollywood forever.

The Disney Revolt is an American story of industry and of the underdog, the golden age of animated cartoons at the world’s most famous studio.
Jake S. Friedman is an animation historian and author of The Art of Blue Sky Studios and The Disney Afternoon. He has appeared as an expert on TV documentaries and written for Animation Magazine, American History Magazine, the Huffington Post, and Philadelphia Daily News. He worked for ten years as an animation artist on television shows and features, and now works as a mental health specialist, teaching the occasional History of Animation course at NYU or FIT. He lives with his wife in New York City. www.JakeSFriedman.com
“Jake S. Friedman has done an impressive job of research, to put it mildly. Without knowing the sequence of events it’s impossible to understand how this bitter strike came about. Add to that the perceived insults, slights, and resentments and you have the stuff of great drama.” —Leonard Maltin, film critic and historian, author of Of Mice and Magic

“Author Jake S. Friedman takes us on a deep dive into Hollywood history delivered in a style that reads like a film noir page turner. I could not put this book down.” —Don Hahn, producer of Beauty and the Beast and The Lion King

“Gangsters, backroom deals, murder, and . . . cartoons? I’ve long been interested in the 1941 Disney strike, and Jake S. Friedman’s book does not disappoint. Well written and thoroughly researched—a great read!” —Pete Docter, director of Monsters Inc., Up, Inside Out, and Soul

“Friedman’s research is comprehensive, the cast of characters succinctly etched. Most impressive, in the candid telling of this tale of labor relations and film art, are the all-too-human stories woven with equity throughout. Highly recommended.” —John Canemaker, Oscar-winning filmmaker, animation historian, and author

“As engaging as it is informative, Friedman weaves a compelling chronology of the confluence of two industry leaders and the collision course that forever changed the industry they both helped to build.” —Mindy Johnson, author of Ink & Paint

“A complex, captivating account of the collision between hard-fought labor rights and the flights of fancy that would charm millions and make millions.” —David Alpern, veteran Newsweek senior editor

“The Disney Revolt is a lasting work of historiography and storytelling. With the skill and verve of a master artisan from the era he illuminates, Jake S. Friedman recounts an epic tale.” —Michael Dolan, editor, American History magazine

"Disney and animation historians and readers of American labor history will find a fascinating chronicle of an essential labor dispute in twentieth century America." — Booklist

"A fascinating look at how the Disney magic happened, and how close it came to tumbling down." — Library Journal

"[The Disney Revolt] was written for a broader audience with the hope that anyone, even those without a background or interest in animation and history, could draw inspiration from it. The book is a call to action." — The Jewish Exponent

"An easy read with its business aspect and its trip down Memory Lane. If you’re interested in labor relations or if you’ve always been a fan of The Mouse, this book’ll have you trapped." — The Nashville Ledger