We Called Ourselves Rocketboatmen: :: The Untold Stories of the Top-Secret LSC(S) Rocket Boat Missions of World War II at Sicily, Normandy (Omaha and (Paperback) 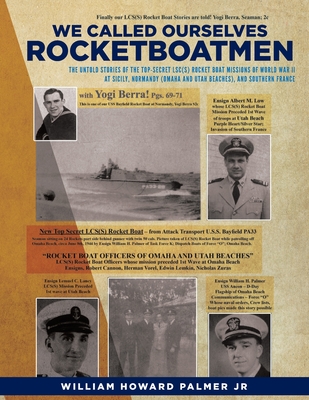 We Called Ourselves Rocketboatmen: :: The Untold Stories of the Top-Secret LSC(S) Rocket Boat Missions of World War II at Sicily, Normandy (Omaha and (Paperback)

D-Day, June 6, 1944-a day never to be forgotten. More than 156,000 troops crossed the English Channel from England to Normandy, making it the largest seaborne invasion in history. Leading the pre-invasion ashore were the brave, but little known, rocketboatmen, as they called themselves. Their job, as the first close-up Naval offense, was to soften up the German beach defenses with 48 rockets, machine gunnery, and smoke screening, preparing the way for the LCVP infantrymen.

Through private diary entries and firsthand accounts, many read here for the first time, the unfolding of the earliest events leading up to the invasion is told in vivid and unforgettable detail. In choppy seas, oftentimes like sitting ducks in the water, these young men manned their landing craft and approached the beaches at exactly 6:00 A.M.- half an hour before H-hour-unleashed their barrage of forty-eight rockets, twelve boats at Omaha, twelve at Utah Beach, lighting up the coastline like a Fourth of July grand finale. Several boats actually beached at Omaha and Utah under shell and bombardment and crossfire sustaining casualties, eliminating German coastline pill boxes.

Relive their compelling tales in this incredible story.