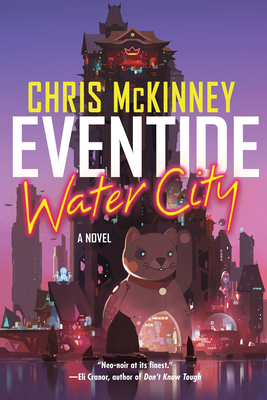 This is book number 2 in the The Water City Trilogy series.

A futuristic fusion of noir, adventure, thriller, and horror, the second installment in the acclaimed Water City Trilogy explores how dystopia might be right around the next century’s corner.

Year 2150: Eight years after the murder of Akira Kimura, Water City’s renowned scientist and anointed “God,” the nameless antihero who once risked everything to find Akira’s killer is no longer a detective, but a stay-at-home dad. While his wife climbs the corporate ladder of the Water City Police Department, he raises his now nine-year-old daughter and occasionally takes the odd job as a bounty hunter.

Water City’s domestic bliss is threatened when Ascalon’s Scar—the permanent mark left by the elimination of Sessho-seki, an asteroid that nearly wiped out life on Earth—vanishes from the sky and a familiar face thought dead returns from the ocean depths to exact revenge on humanity. What follows is a wild journey, both deep below and high above a futuristic Pacific, that takes Water City’s antihero from Lucky Cat City (formerly Osaka, Japan) to the moon and back, all to stop the destruction of the last of the human race.

Hawai'i author Chris McKinney’s cinematic, immersive follow-up to Midnight, Water City explores technology, class, climate change, and the lengths desperate people will go to in order to protect the ones they love.
Chris McKinney was born and raised in Hawai'i, on the island of Oahu. He has written six novels, including The Tattoo and The Queen of Tears, a coauthored memoir, and the screenplays for two feature films and two short films. He is the winner of the Elliott Cades Award and seven Kapalapala Po'okela Awards and has been appointed Visiting Distinguished Writer at the University of Hawai'i at Mānoa.
Praise for Eventide, Water City

“Eventide, Water City is sci-fi, neo-noir at its finest. Chris McKinney doesn’t just build a world—he conjures up a glimpse at what the world could be if we’re not careful.”
—Eli Cranor, author of Don't Know Tough

“The whodunit angle may be familiar but Chris McKinney makes it work with his world-building chops and the creation of an authentic protagonist.”
—The Toronto Star

“This gritty noir set in a sci-fi landscape is a real page-turner.”
—Buzzfeed

“Many writers use crime fiction to reveal hidden elements of society or expose the abuses of those in power . . . And that sense of powerful people concealing crucial secrets from the general public is very much on display in Chris McKinney’s Midnight, Water City—a novel which makes the most of its slow-burning narrative of detection.”
—Tor.com