Touched with Fire: Morris B. Abram and the Battle against Racial and Religious Discrimination (Hardcover) 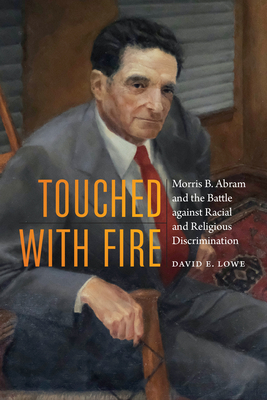 Touched with Fire: Morris B. Abram and the Battle against Racial and Religious Discrimination (Hardcover)

Morris B. Abram (1918–2000) emerged from humble origins in a rural South Georgia town to become one of the leading civil rights lawyers in the United States during the 1950s. While unmasking the Ku Klux Klan and serving as a key intermediary for the release of the Rev. Martin Luther King Jr. from prison on the eve of the 1960 presidential election, Abram carried out a successful fourteen-year battle to end the discriminatory voting system in his home state, which had entrenched racial segregation. The result was the historic “one man, one vote” ruling of the U.S. Supreme Court in 1963.

At the time of his selection—the youngest person ever chosen to head the American Jewish Committee—Abram became a leading international advocate for the Jewish state of Israel. He was also a champion of international human rights, from his leadership in the struggle to liberate Soviet Jewry to his service as permanent representative to the United Nations in Geneva.

In Touched with Fire David E. Lowe chronicles the professional and personal life of this larger-than-life man. Encompassing many of the contentious issues we still face today—such as legislative apportionment, affirmative action, campus unrest, and the enforcement of international human rights— Abram’s varied career sheds light on our own troubled times.

Abram was tapped for service by five different U.S. presidents and survived a battle with acute myelocytic leukemia. He never abandoned his belief that the United States might someday become a colorblind society, where people would be judged, as his friend Martin Luther King dreamed, not by the color of their skin but by the content of their character. This elegantly written book is the biography Abram has long deserved.

David E. Lowe is a retired vice president for government relations and public affairs for the National Endowment for Democracy. Lowe, who holds a PhD in political science from Johns Hopkins University, has taught at Drew University, George Washington University’s Graduate School of Political Management, and the Washington Semester Program of Lewis and Clark College, and has consulted for the United States Holocaust Memorial Museum and UN Watch.
"In the hyper-politicized world we inhabit today, where Democrats and Republicans are tribal in their fanaticism for their respective parties and antipathy toward their opponents, Lowe’s recounting of Abram’s life offers a welcome reminder that public servants once did have values that trumped partisan politics. There may not be another Morris Abram, but his largeness of spirit and ability to stay on a consistently principled path serves as an inspiration to future public servants."—Jay P. Lefkowitz, Commentary Magazine

"Throughout Touched With Fire, Lowe ably shows how legal victories do not happen through mere force of moral suasion, but as campaigns, carefully coordinated and stage-managed with other stakeholders."—Sean Keeley, American Interest

"David Lowe provides valuable information on the life and times of Morris Abram; this talented man from the South who made a major contribution to putting an end to a voting system that discriminated against African Americans, an advocate for civil and human rights and a spokesperson on behalf of American Jewry."—Braham Dabscheck, Industrial Relations

"In Touched with Fire: Morris Abram and the Battle Against Racial and Religious Discrimination, David E. Lowe illuminates Abram’s multifaceted career, giving him the lasting recognition he deserves. . . . Touched with Fire is a good read and Morris B. Abram is well worth remembering."—Janice Blumberg, Southern Jewish Historical Journal

"David E. Lowe's Touched with Fire: Morris B. Abram and the Battle against Racial and Religious Discrimination effectively brings to life the details and the delegations, the triumphs and the failures, and the challenges and the changes that are associated with the life and legacy of Morris B. Abram."—Mary Catherine Mueller, Journal of Contemporary Antisemitism

“A long overdue biography of a Southern white civil rights pioneer, American Jewish leader, Brandeis University president, U.S. ambassador, and human rights activist who ended up on the wrong side of the 1960s and whom history has unjustly forgotten.  This is an instructive tale of liberalism’s swerve and of roads not taken.”—Jonathan D. Sarna, University Professor and Joseph H. and Belle R. Braun Professor of American Jewish History at Brandeis University

“Morris Abram will always be remembered at the American Jewish Committee as a towering Jewish leader of the twentieth century. David Lowe compellingly traces his career as advocate extraordinaire for civil and human rights, Israel, and Soviet Jewry. Abram’s model of effective leadership continues to be instructive, as this impressive volume highlights.”—David Harris, CEO of American Jewish Committee