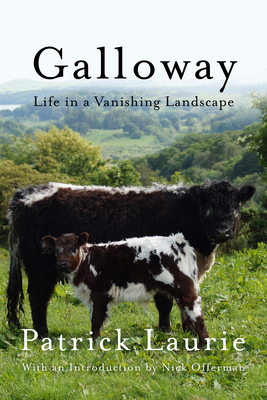 
On Our Shelves Now at:
On the land of his ancestors in Scotland, a young farmer struggles to find a balance between farming, the conservation of wild, and human culture as he establishes a herd of heritage cattle.

Galloway, an ancient region in an obscure corner of Scotland, has a proud and unique heritage based on hardy cattle and wide moors. But as the twentieth century progressed, the people of Galloway deserted the land and the moors are transforming into a vast commercial forest.

Desperate to connect with his native land, Patrick Laurie plunges into work on his family farm. Investing in the oldest and most traditional breeds of Galloway cattle, he begins to discover how cows—and the special care that this breed requires—once shaped people, places, and nature in this remote and half-hidden place. As the cattle begin to dictate the pattern of his life, Laurie stumbles upon another loss; the new forests have driven the catastrophic decline of the much-loved curlew, a bird that features strongly in Galloway's consciousness. The links between people, cattle, and wild birds become a central theme as Laurie begins to face the reality of life in a vanishing landscape. Exploring the delicate balance between farming and conservation while recounting an extraordinarily powerful personal story, Galloway delves into the relationship between people and places under pressure in the modern world.
Patrick Laurie was born and brought up in Galloway. After gaining a Master of Arts degree in Scottish Language and Literature at the University of Glasgow, he moved to the Isle of Harris to work on hebridean fishing boats. Since 2010, he has balanced freelance journalism with farming and conservation projects in Galloway and the northern part of the UK.
"A quixotic tale of determination, endurance and wonder . . . His descriptions of these venerable contraptions are thrilling to read . . . This is a beautifully written, passionate memoir . . . one lived in intimacy with the weather (generally horrible), in touch with the sky and earth and its creatures, domesticated and wild." —Katherine A. Powers, StarTribune (Minneapolis)

"So remarkable, and so profoundly enjoyable to read . . . it seems as though the Galloway land itself, on which his family has lived for centuries, is breathing and speaking through him, sometimes driving his prose to extraordinary heights and depths of rich, sweet lyricism. " —The Scotsman

"Laurie’s narrative is a celebration of farming and the rural life, hard as it may be . . . A lyrical, keenly observed addition to the top shelf of British nature writing." —Kirkus Reviews (starred review)

"Journalist Laurie shines in his debut, a heartstring-tugging and beautifully written account of farming in his ancestral home of Galloway . . . Blending arch humor with evocative prose, Laurie shares stories of his experience raising a rare breed of cattle native to the region on his family’s farm, in an attempt to commune with the land his forefathers worked . . . Like the bittersweet cry of the curlew, Laurie’s lyrical tribute will be hard to forget." —Publishers Weekly (starred review)

“This very contemporary account, taking place as it does in the midst of numerous environmental tipping points, is a crucial reminder that tending to the world right in front of us is maybe the best thing we can do.” —Literary Hub, Best Books of the Year

"Laurie writes lyrically about his small herd of Riggit cattle and his crops, their successful growth contrasted with his and his wife's fertility struggles . . . The account brims with beautiful details of farm life, complemented perfectly by Sharon Tingey's penciled illustrations. Narrated in Laurie’s Scottish voice, this paean to simpler times is reminiscent of James Herriot's writings about Yorkshire and well worth a read." —Booklist

"How do we find our truest selves? Patrick Laurie’s answer has been to meld back into the landscape that had formed him, returning to his heart's home; and then endeavoring to revive a working landscape, its wild things, and his soul. He tells the story of this journey in prose that will take you there. Join him on this walk." —Carl Safina, author of Becoming Wild: How Animal Cultures Raise Families, Create Beauty, and Achieve Peace