Aquanaut: The Inside Story of the Thai Cave Rescue (Paperback) 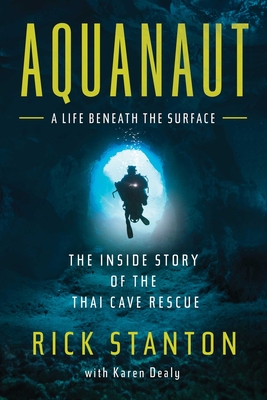 Aquanaut: The Inside Story of the Thai Cave Rescue (Paperback)


Not On Our Shelves—Ships in 1-5 Days
The enthralling inside story of the Tham Luang cave rescue in Thailand—told by the leader of the daring underwater rescue mission.

In July 2018, twelve boys and their soccer coach disappeared into the Tham Luang Cave in Thailand.

Trapped miles beneath the surface, not even the Thai Navy SEALs had the skills to bring them to safety. With the floodwater rising rapidly, time was running out.

Any hope of survival rested on Rick Stanton, a retired British firefighter with a living room full of homemade cave-diving equipment. As unlikely as it seemed, Rick and his partner, John Volanthen, were regarded as the A-team for exactly this kind of mission.

The Thai Cave Rescue was the culmination of a lifelong obsession, requiring every ounce of skill and ingenuity accumulated by Rick over a four decade pursuit of the unknown.

While the world held its breath, Rick, John, and their assembled team raced against time in the face of near impossible odds. There was simply no precedent for what they were attempting to do. . . .
Rick Stanton MBE served for years as a firefighter, but it was his “hobby” of cave-diving that was his passion He has quietly spent forty years exploring caves around the world, steadily building his unique skill set as he defied limits, pushed boundaries, and discovered parts of the earth that had never been seen before. Along the way, he and his dive partners became the ones to call for the most challenging cave rescue and recovery missions. In 2018, he found himself on the world's stage when he led the team that rescued a children’s soccer team that was trapped inside Thailand's flooded Tham Luang cave. Rick needed to rely on all the experiences and friendships he'd gathered along the way, as he carefully planned and then successfully executed one of the most noteworthy rescue missions in modern history.
Praise for Rick Stanton and Aquanaut:

"The British divers are all heroes.”
— Clive Cussler

"The rescue was fantastic, it really was.”
— HRH Prince William

"Diver Rick Stanton relives the rescue of the century.”
— The Sunday Times (London)

"One of the great stories of our time.”
— Elizabeth Chai Vasarhelyi, Oscar-winning co-director of Free Solo

“In the summer of 2018, a friend told Stanton about a group of teenage Thai football players who had become stranded inside a cave after monsoon rains blocked the exit. Even after he discovered the boys were all alive, he confronted obstacles at every turn: on-again, off-again rains that threatened to flood the caves even more; clumsy and dangerous rescue attempts by unskilled Navy SEALS; and a lack of proper equipment to save the boys. Using an unorthodox recovery method, Stanton led a successful rescue mission that earned him worldwide acclaim. The tale of the author’s exploits is undeniably exciting.”
— Kirkus

"This is a unique and heart-pounding story of courage and survival. Whether readers followed the news coverage of Tham Luang closely or not, they will benefit from reading Stanton's chronicle, which pairs well with the new documentary film, The Rescue."
— Booklist

“Remarkable. This book is the chronicle of a man from a humble background who worked devilishly hard to become accomplished in his beloved avocation, succeeded, and was willing to go anywhere to help people in the most dire cave disasters. Mr. Stanton shuns the ‘hero’ label for his Thai cave triumph, but your (claustrophobic) reviewer deems it appropriate.”
— Wall Street Journal