DARLING in the FRANXX Vol. 5-6 (Paperback) 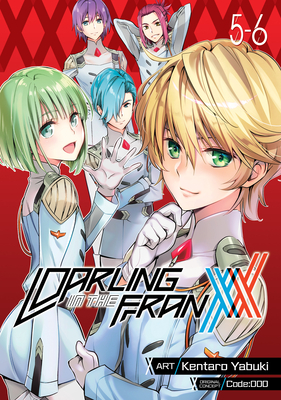 DARLING in the FRANXX Vol. 5-6 (Paperback)

Hiro and the other parasites are granted a much-needed beach vacation. However, instead of unwinding in relaxation, things intensify among the members of Squad 13—especially Zero Two and Ichigo. While Zero Two balks at taking orders from anyone, Ichigo strives to be the leader that Squad 13 needs. When a new type of Klaxosaur arrives, will the squad be able to work together to take it down before it destroys the Plantation? Or will their emotions get the better of them?
Code:000 is the creative team behind the anime/manga franchise DARLING in the FRANXX.


Kentaro Yabuki is a well-known manga creator best known for the bounty hunter series Black Cat and its anime adaptation. He is also the illustrator of DARLING in the FRANXX, sexy alien comedies To Love Ru and To Love Ru Darkness, and Ayakashi Triangle.