DARLING in the FRANXX Vol. 3-4 (Paperback) 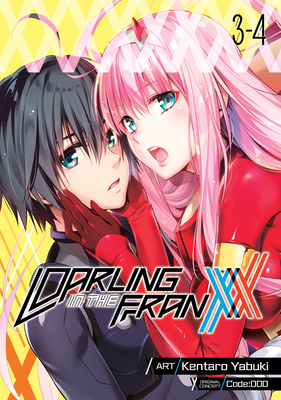 DARLING in the FRANXX Vol. 3-4 (Paperback)


Not On Our Shelves—Ships in 1-5 Days
HOLD ON TIGHT!

Hiro has only just recovered from his latest battle when the alarm sounds—a Klaxosaur swarm is imminent, and one of them is the largest foe the Parasites have ever faced! Hiro and Zero Two must push themselves to the absolute limits to protect their squadmates and the Plantations. Is Hiro ready, or will Zero Two ride him to death like all her other partners?
Code:000 is the creative team behind the anime/manga franchise DARLING in the FRANXX.


Kentaro Yabuki is a well-known manga creator best known for the bounty hunter series Black Cat and its anime adaptation. He is also the illustrator of DARLING in the FRANXX, sexy alien comedies To Love Ru and To Love Ru Darkness, and Ayakashi Triangle.