Miracles in Manhattan: Stories of Hope and Faith From The Heart of New York City (Paperback) 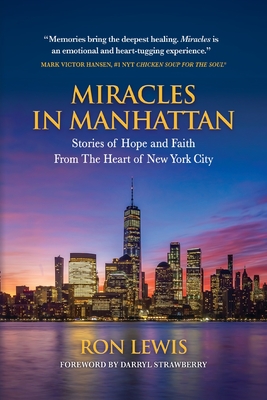 Miracles in Manhattan: Stories of Hope and Faith From The Heart of New York City (Paperback)

Out of the ashes of September 11, 2001, unique miracles in the lives of New Yorkers began to unfold...

People shocked by the terrorist attacks were now drawn to an "off-Broadway" theatre in Times Square, where fears and addictions were broken, and minds and hearts were put back together again. A church was started with just a handful of believers, resulting in one changed life after another, with stories growing into the hundreds, then thousands.

Miracles in Manhattan shares the story of those who came through real-life desperation, despair, and hopelessness, to find transformed lives of meaning and purpose, with an impact felt around the world.

"These stories must be told... I couldn't put it down "

Ron Lewis is the founding pastor and senior minister of Every Nation Church, NYC, and King's Park International Church in Durham, NC. In his nearly 40 years of ministry, Ron has helped start more than 100 churches in America and abroad; almost all are known for being multi-ethnic. Ron founded multiple ministries, including Jordan Lewis Missions, and the award-winning Youth Life Foundation in N.C. His book, Answering the Call, has helped thousands of young people globally find and define their call to full-time ministry. He loves spending time with his wife and six children, three daughters-in-law, and grandkids. For more information, visit RonLewisMinistries.org