The Gangster's Guide to Sobriety: My Life in 12 Steps (Hardcover) 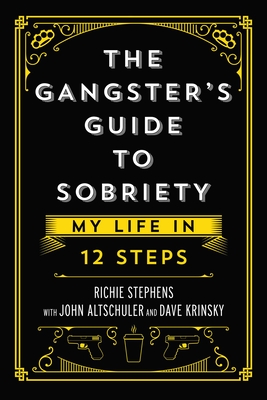 The Gangster's Guide to Sobriety: My Life in 12 Steps (Hardcover)

By Richie Stephens, John Altschuler (With), Dave Krinsky (With)

A darkly humorous and inspiring first-person account of the larger-than-life exploits and ultimate redemption of an Irish gangster-turned-actor-turned-sober-storyteller—written in collaboration with the creators of Silicon Valley.

Richie Stephens is an actor who often plays hardened gangsters and criminals. This is easy for him because he was a drug trafficker, kidnapper, drug addict, alcoholic, and all-around criminal himself. His life twisted and turned in harrowing self-destructive adventures that took him from his native Ireland to San Francisco, Australia, and finally, Los Angeles, coalescing into a classic tale of a man trying to run from his problems by moving to new and more exotic locations—a hard and painful realization that comes at a point in which he’s about to take his own life. The only reason there is a story to tell is because he did not. Instead, he found help, and in doing so, found himself. More than that, he found that help comes in different forms, and oftentimes it just takes the right thought to hit at the right time for it all to make sense.

The Gangster’s Guide to Sobriety chronicles Richie’s descent into the abyss of crime and dependency, and how his personal understanding of freedom allowed him to become the functioning positive force he is today. Richie’s story is sprawling and epic, but the key to the book is the same key to his recovery: the 12 Steps. With his own flair and original understanding of life and the world, he followed the 12 Steps to find the clarity he needed to save his own life and evolve into a positive force for others. As Richie says, “Hopefully if people see that someone as fucked up as me could change their life, then there is hope for anyone.”

The Gangster’s Guide to Sobriety is gripping in its honesty and openness. Even at its darkest moments, there is a keen understanding of the absurd nature of life as the author comes to grips with his failings and his faith, while also entering a place of self-acceptance. This is a story of redemption and the power of the human spirit, and how sometimes you have to turn to something greater than yourself.
Richie Stephens is an Irish actor and writer who lives in Los Angeles, California. He is best known for playing villains on TV and in films, including Blue Bloods, MacGyver, Criminal Minds, and Days of Our Lives, his appearances in multiple Florence and the Machine music videos, and his ability to do a broad range of accents. He has appeared in over one hundred stage and screen productions and is a member of Oscar-winner Bobby Moresco’s Actor’s Gym—an exclusive group of working actors and writers. He’s been a circuit speaker in recovery groups, and he actively works with the homeless at The Midnight Mission and The Center in Hollywood.

John Altschuler and Dave Krinsky are screenwriters and executive producers of Emmy Award-winning shows King of the Hill and Silicon Valley, and wrote the hit comedy movie Blades of Glory starring Will Ferrell. They met at the University of North Carolina at Chapel Hill where they created the first student-produced comedy show on UNC Student Television, then wrote for the legendary humor magazine National Lampoon before moving to Los Angeles. In addition to several Emmy nominations, they received a SXSW film award for their work on Silicon Valley, and have won an Environmental Media Award.