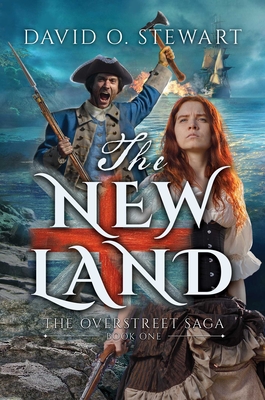 
Coming Soon—Pre-Order Now
From bestselling historian and storyteller David O. Stewart, The New Land brings the reader back in time to tell uniquely American stories—full of adventure, excitement, heartbreak, and a tapestry of richly developed characters.

Lose yourself in the challenges and emotions of eighteenth-century Maine.

In 1753, Johann Oberstrasse’s wife, Christianne, announces that their infant sons will never soldier for the Landgraf of Hesse like their father, hired out to serve King George of England. In search of a new life, Johann and the family join an expedition to the New World, lured by the promise of land on the Maine coast. A grinding voyage deposits them on the edge of a continent filled with dangers and disease. Expecting to till the soil, Johann finds that opportunity on the rocky coast comes from the forest, not land, so he learns carpentry and trapping. To advance in an English world, Johann adapts their name to Overstreet.

But war follows them. The French and their Indian allies mount attacks on the English settlements of New England. To protect their growing family and Broad Bay neighbors, Johann accepts the captaincy of the settlement’s militia and leads the company through the British assault on the citadel of Louisbourg in Nova Scotia. Left behind in Broad Bay, Christianne, their small children, and the old and young stave off Indian attacks, hunger, and cruel privations.

Peace brings Johann success as a carpenter, but also searing personal losses. When the fever for American independence reaches Broad Bay in 1774, Johann is torn, then resolves to kill no more…unlike his son, Franklin, who leaves to stand with the Americans on Bunker Hill. At the same time, Johann faces old demons and a new crisis when an escaped prisoner—a hired Hessian soldier, just as he had been—arrives at his door.
After many years as a trial and appellate lawyer, David O. Stewart became a bestselling writer of history and historical fiction. His first novel, The Lincoln Deception, was about the John Wilkes Booth Conspiracy. Sequels include The Paris Deception, set at the Paris Peace Conference in 1919, and The Babe Ruth Deception, which follows Babe’s early years with the Yankees. Released in November 2021, The New Land began the Overstreet Saga.

David’s histories explore the writing of the Constitution, the gifts of James Madison, the western expedition and treason trial of Aaron Burr, and the impeachment of President Andrew Johnson. In February 2021, Dutton published his George Washington: The Political Rise of America’s Founding Father.