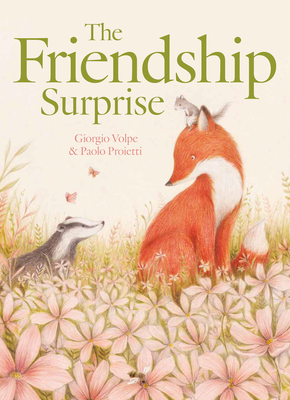 
On Our Shelves Now at:
It is spring and Little Red fox is excited to be reunited with his best friend, Hazel, a dormouse who will shortly wake from a long sleep. But over the winter, the fox has made another friend, Brock the badger. Little Red decides revealing the new friendship is not the surprise Hazel will want to wake to, so he delays bringing it up as they resume their games. Bu the fox needs to find a way to introduce the friends while maintaining the special friendship with Hazel he holds so dear. Eventually the dilemma is resolved, but not without a surprise or two along the way. This book continues the friendship story told in the companion title Before We Sleep, also by Volpe and Proietti, although it may be read and appreciated completely on its own.
Author Giorgio Volpe and illustrator Paolo Proietti have collaborated on three previous picture books including Before We Sleep which features two of the three characters in this new title. Before We Sleep was their first book to be published in English and it received a starred review from Kirkus Reviews. Giorgio is a an actor, playwright and children's book author. Paolo is a graduate of the International School of Comics in Rome. In 2016 he was awarded a Scarpetta d'Oro, the prestigious international award for children's book illustration. Giorgio Volpe and Paolo Proietti both live and work in Rome, Italy.Translator, Angus Yuen-Killick is the founder and publisher of Red Comet Press. Originally from the UK, he lived in Rome in the 1980s. He now lives and works in brownstone Brooklyn, NY.