My Dad Is a Grizzly Bear (Hardcover) 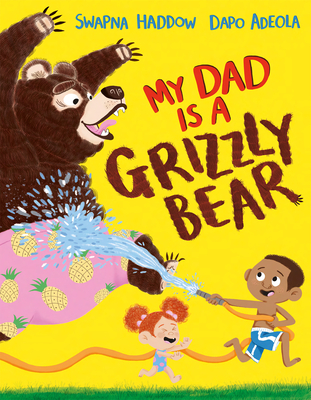 My Dad Is a Grizzly Bear (Hardcover)

A playful, warm and funny story about a boy with a wild imagination and his lively family, from brand new creative duo: Swapna Haddow and Dapo Adeola.

Shhh. Beware. My dad is a grizzly bear.

In this family, it's just possible that Dad is a grizzly bear . . . He has fuzzy fur, enormous paws and he loves the outdoors. He sleeps a lot, even at the movies and when he's awake, he's always hungry, usually eating up all the honey, what else could Dad be? But sometimes, when it's scary at night, a lovely big bear hug is just what is needed.

Swapna Haddow trained as a doctor, but after discovering she didn't like blood, decided on a career change, and wrote her the first book in which quickly became the bestselling Dave Pigeon trilogy. She has since won numerous children's book awards, has another series called Ballet Bunnies (writing as "Swapna Reddy") and recently released the first in a new series called Bad Panda. Swapna lives in New Zealand with her husband, their son, and their dog. You can usually find Swapna writing, reading, or eating Jaffa Cakes. Sometimes you might find her doing all three at the same time. www.swapnahaddow.co.uk Dapo Adeola is an award-winning illustrator and designer who creates characters and images that challenge expectations around race and gender in a fun and upbeat way. He has illustrated two previous picture books, Look Up and Clean Up! both written by Nathan Bryon. London born, of Nigerian heritage, he is an avid believer in the importance of equal representation in the creative arts. Dapo runs illustration and character design workshops to highlight the possibilities of a career in illustration to children of various backgrounds and ethnicities. Dapo Adeola lives in London, England. For more information find him on Twitter @DapsDraws. Dapo Adeola won the distinction of illustrator of the year at the 2022 British Book Awards.