Don't Be Afraid to Win: How Free Agency Changed the Business of Pro Sports (Hardcover) 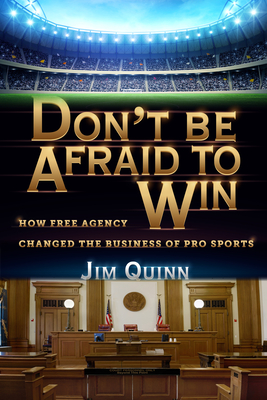 Don't Be Afraid to Win: How Free Agency Changed the Business of Pro Sports (Hardcover)


Not On Our Shelves—Ships in 1-5 Days
Labeled by The New York Times as "instrumental in helping change the face of major professional sports," attorney Jim Quinn has influenced modern sports business for decades. Beginning back in the 1970's with the landmark Oscar Robertson basketball free agency case, Quinn battled owners in all four major leagues to make sure the players got their fair share. In the early 1990's, he faced the goliath National Football League and won the right to free agency for players, Quinn has spent a lifetime dealing in the gritty sports business to make fair agreements for players. Quinn shares significant cases and legal proceedings across major American sports and tells stories of the courtroom battles he fought on behalf of players and labor leaders seeking economic justice in their workplace. He sheds light on known and unknown figures who committed to larger causes than themselves and that modern sports owes a debt to the leaders of the past who risked their careers. Through Quinn's lengthy career he has helped to empower athletes to speak and act in the best interest of the sports community and overcome some of the toxic figures who sought to drag down league success for their own ego and greed. In Don't Be Afraid to Win, Quinn provides a unique point of view of someone who was personally involved in making changes happen in the business. His is a masterful examination of how sports has grown dramatically over the decades, how it benefited from the rise of sports unions and free agency, and how there is still fairness to be gained across the leagues.