Things I Don't Want to Know: On Writing (Paperback) 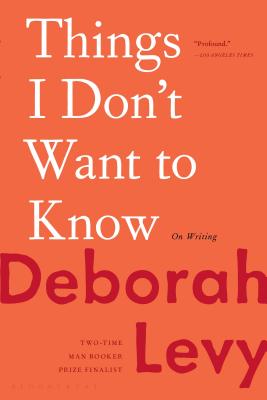 Things I Don't Want to Know: On Writing (Paperback)

A shimmering jewel of a book about writing from two-time Booker Prize finalist Deborah Levy, to publish alongside her new work of nonfiction, The Cost of Living.

Blending personal history, gender politics, philosophy, and literary theory into a luminescent treatise on writing, love, and loss, Things I Don't Want to Know is Deborah Levy's witty response to George Orwell's influential essay "Why I Write." Orwell identified four reasons he was driven to hammer at his typewriter--political purpose, historical impulse, sheer egoism, and aesthetic enthusiasm--and Levy's newest work riffs on these same commitments from a female writer's perspective.

As she struggles to balance womanhood, motherhood, and her writing career, Levy identifies some of the real-life experiences that have shaped her novels, including her family's emigration from South Africa in the era of apartheid; her teenage years in the UK where she played at being a writer in the company of builders and bus drivers in cheap diners; and her theater-writing days touring Poland in the midst of Eastern Europe's economic crisis, where she observed how a soldier tenderly kissed the women in his life goodbye.

Spanning continents (Africa and Europe) and decades (we meet the writer at seven, fifteen, and fifty), Things I Don't Want to Know brings the reader into a writer's heart.

Deborah Levy writes fiction, plays, and poetry. Her work has been staged by the Royal Shakespeare Company, broadcast on the BBC, and widely translated. The author of highly praised novels, including The Man Who Saw Everything (longlisted for the Booker Prize), Hot Milk and Swimming Home (both Man Booker Prize finalists), The Unloved, and Billy and Girl, the acclaimed story collection Black Vodka, and two parts of her working autobiography, Things I Don't Want to Know and The Cost of Living, she lives in London. Levy is a Fellow of The Royal Society of Literature.

"A lively, vivid account of how the most innocent details of a writer's personal story can gain power in fiction." - New York Times Book Review

"[Levy] is a skilled wordsmith and creates an array of intense emotions and moods in precise, controlled prose." - The Independent (UK)

"A vivid, striking account of a writer's life." - The Spectator (UK)

"An up-to-date version of 'A Room of One’s Own', and, like the Virginia Woolf essay, I suspect it will be quoted for many years to come." - Irish Examiner

"Levy successfully weaves historical, political, and personal threads together to form a nuanced account of her life and why she writes. Her graceful memoir/essay emphasizes a woman’s need to speak out even if she has to use a quiet voice. For feminists and memoir enthusiasts." - Library Journal

"Rather than, say, telling the reader to show rather than tell, [Levy] declines to tell us anything and then shows us a great deal. What results is much more valuable than any literal writing guide or any literal response to Orwell would have been. It certainly has greater political import." - Biographile

"Few essayists have the courage and talent to go head-to-head with George Orwell. Deborah Levy's response to Orwell's iconic piece "Why I Write" is at once a feminist call to arms, a touching memoir of small moments, and a guide to writing fiction from one of literature's bravest rulebreakers." - Barnes & Noble Review