When Colorblindness Isn't the Answer: Humanism and the Challenge of Race (Humanism in Practice) (Paperback) 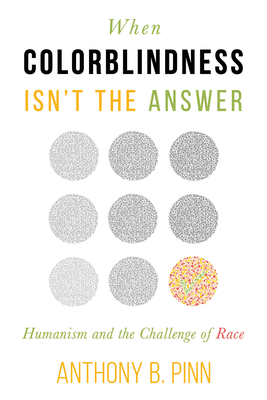 When Colorblindness Isn't the Answer: Humanism and the Challenge of Race (Humanism in Practice) (Paperback)

By Anthony B. Pinn


Not On Our Shelves—Ships in 1-5 Days
The future of the United States rests in many ways on how the ongoing challenge of racial injustice in the country is addressed. Yet, humanists remain divided over what if any agenda should guide humanist thought and action toward questions of race. In this volume, Anthony B. Pinn makes a clear case for why humanism should embrace racial justice as part of its commitment to the well-being of life in general and human flourishing in particular. As a first step, humanists should stop asking why so many racial minorities remain committed to religious traditions that have destroyed lives, perverted justice, and justified racial discrimination. Rather, Pinn argues, humanists must first confront a more pertinent and pressing question: why has humanism failed to provide a more compelling alternative to theism for so many minority groups? For only with a bit of humility and perspective—and a recognition of the various ways in which we each contribute to racial injustice—can we truly fight for justice.
Anthony B. Pinn is the Agnes Cullen Arnold Professor of Humanities, professor of religious studies, and founding director of the Center for Engaged Research and Collaborative Learning at Rice University. He is the first African American full professor to hold an endowed chair in the history of Rice University. He is also director of research for the Institute for Humanist Studies and is a member of the Board of Directors for the American Humanist Association. He is the author of The End of God-Talk and Writing God's Obituary, and he lives in Houston, Texas.
"A must read for this moment in history!" —Sharon D. Welch, Provost and Professor, Religion and Society, Meadville Lombard Theological School

“When Colorblindness Isn’t the Answer is a practical guide for understanding and actively working against white supremacy, racism, and their offspring called ‘race.’ While directed toward humanists, everyone can benefit from this immensely readable and practice-oriented analysis . . . . This book is a guide for the perplexed and fearful. It provides practical tools for antiracist action.” —William David Hart, professor, Religious Studies; holder of Margaret W. Harmon Chair, Macalaster College