The Art of the Lie: How the Manipulation of Language Affects Our Minds (Paperback) 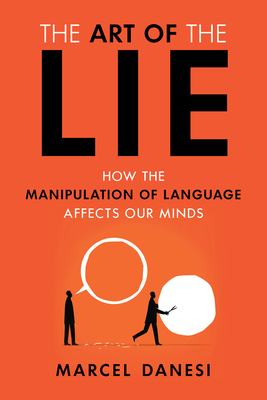 The Art of the Lie: How the Manipulation of Language Affects Our Minds (Paperback)


Not On Our Shelves—Ships in 1-5 Days
This book shows how language can be used strategically to manipulate beliefs.

From Machiavelli to P. T. Barnum to Donald Trump, many have perfected the art of strategically using language to gain the upper hand, set a tone, change the subject, or influence people's beliefs and behaviors. Language--both words themselves and rhetorical tactics such as metaphor, irony, slang, and humor--can effectively manipulate the minds of the listener.

In this book, Marcel Danesi, a renowned linguistic anthropologist and semiotician, looks at language that is used not to present arguments logically or rationally, but to "move" audiences in order to gain their confidence and build consensus. He demonstrates that through language techniques communicators can not only sway opinions but also shape listeners' very perception of reality. He assesses how the communicative environment in which the art of the lie unfolds--such as on social media or in emotionally-charged gatherings--impacts the results.

Danesi also investigates why lies are often accepted as valid. Artful lying fits in with an Internet society that is largely disinterested in what is true and what is false and in which attention is often given to speech that is entertaining or persuasive. Have we become immune to lies because of a social media discourse shaped by untruths? In an electronic age where facts are deemed irrelevant and conspiracies are accorded as much credibility as truths, this book discusses the implications of lying and language for the future of belief, ethics, and American democracy itself.
Marcel Danesi is professor of linguistic anthropology and semiotics at the University of Toronto, director of the university's Program in Semiotics and Communications, and an internationally-renowned semiotician. He is the author of Understanding Media Semiotics, 2nd edition; Popular Culture: Introductory Perspectives, 4th edition; Language, Society, and New Media: Sociolinguistics Today, 2nd Edition; Murder in Plain English (with Michael Arntfield); and The Semiotics of Emoji: The Rise of Visual Language in the Age of the Internet. He has also published many articles in scholarly journals. He is the editor in chief of Semiotica: Journal of the International Association for Semiotic Studies and a past-president of the Semiotic Society of America. He has appeared frequently on all major media, including NPR and CBC, and has been interviewed by the New York Times, the Huffington Post, and other media outlets.
“When systematic lying is the modus operandi of the most powerful leader on the planet, it becomes vitally important to understand the power of linguistic manipulation to distort perceptions of reality and discourage critical thinking. There are many more facets to the successful lie than simply not telling the truth, and this book provides an excellent analysis of how those various elements can be so effective. I highly recommend The Art of the Lie to all who strive to understand and confront deceit, political or otherwise.”

—James Alcock, PhD, professor of psychology at York University and author of Belief: What It Means to Believe and Why Our Convictions Are So Compelling

“When lies are weaponized, defenders of truth need an equally potent weapon to fight back. Marcel Danesi’s The Art of the Lie is the weapon that can defeat the liars and leave them no retreat.”

—Keith M. Parsons, professor of philosophy and humanities, University of Houston–Clear Lake, and coauthor of Polarized