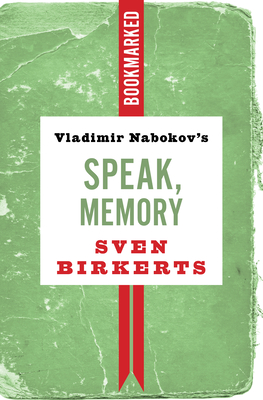 "Birkerts reads Nabokov even as he allows Nabokov to read him. This is reading as high art, exhilarating and wise."--CHRISTOPHER BENFEY, author, Red Brick, Black Mountain, White Clay

"Much more than an exercise in literary criticism, this short book increasingly reads as a profound, sensitive, insightful meditation on family, history, time, language, the nature of artistic inspiration, and, in the end, even the meaning of life."--OLGA GRUSHIN, author, The Dream Life of Sukhanov and Forty Rooms

Vladimir Nabokov's Speak, Memory is one of the most critically acclaimed memoirs of the twentieth century. In this classic account of his life, Nabokov writes about his idyllic Russian childhood in an aristocratic family, the Bolshevik revolution that led to his exile from Russia, and the path that would eventually lead him to live in America.

In the latest volume in Ig's Bookmarked series, celebrated author and critic Sven Birkerts writes about how Speak, Memory not only intersects with various central life-concerns (exile, serendipity and coincidence, childhood, literary redemption), but is also vital to understanding the workings of memory in literature.

Sven Birkerts has been editor of AGNI since July 2002. His most recent books are Changing the Subject: Art and Attention in the Internet Age(Graywolf Press, 2015), The Other Walk (Graywolf Press, 2011), Art of Time in Memoir: Then, Again (Graywolf Press, 2008), and Reading Life: Books for the Ages (Graywolf Press, 2007). He has received grants from the Lila Wallace-Reader's Digest Foundation and the Guggenheim Foundation. He was winner of the Citation for Excellence in Reviewing from the National Book Critics Circle in 1985 and the Spielvogel-Diamonstein Award from PEN for the best book of essays in 1990. Birkerts has reviewed regularly for The New York Times Book Review, The New Republic, Esquire, The Washington Post, The Atlantic, Mirabella, Parnassus, The Yale Review, and other publications. He has taught writing at Harvard University, Emerson College, and Amherst and has most recently been Briggs-Copeland lecturer in nonfiction at Harvard. He was the director of the Bennington Writing Seminars from 2007-2017 and has been a member of the core faculty since its founding in 1994. He lives in Arlington, Massachusetts, with his wife and two children.