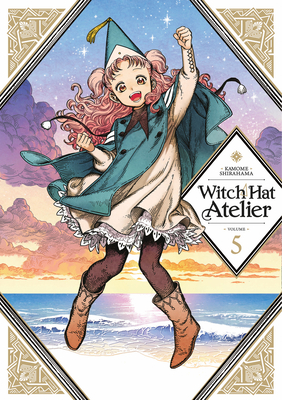 This is book number 5 in the Witch Hat Atelier series.

BELLY OF THE BEAST

Peril abounds as the witches of Qifrey's atelier continue their trials!

In the depths of the Serpentback Cave, a brimmed cap casts its murky shadow upon Qifrey and his apprentices. The brimmed cap's dark magic has transformed Euini into a wild beast, and Coco, Tetia, and a critically injured Qifrey find themselves surrounded by the venomous stares of the cursed Romonons. In the face of doom, these witches must once again find a path to safety using their wits and their unique qualities, but will that be enough as they battle against a powerful new enemy who doesn't play by the rules?
Kamome Shirahama is best known in the United States for her comics cover art at DC and Marvel, including such titles as Star Wars: Doctor Aphra and Batgirl and the Birds of Prey. Witch Hat Atelier is her first manga to be released in English.