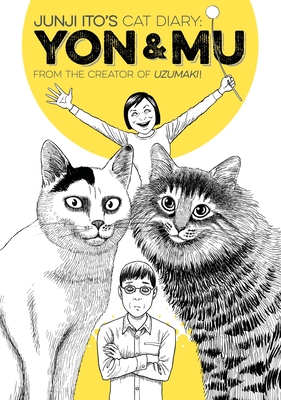 Master of Japanese horror manga Junji Ito presents a series of hissterical tales chronicling his real-life trials and tribulations of becoming a cat owner. Junji Ito, as J-kun, has recently built a new house and has invited his financée, A-ko, to live with him. Little did he know…his blushing bride-to-be has some unexpected company in tow—Yon, a ghastly-looking family cat, and Mu, an adorable Norwegian forest cat. Despite being a dog person, J-kun finds himself purrsuaded by their odd cuteness and thus begins his comedic struggle to gain the affection of his new feline friends.
"The funniest comic that I’ve read in—please forgive me—a cat’s age. … Ito is the creator of nerve-shredding horror comics like Uzumaki, and even though Cat Diary is an autobiographical story about life as a pet owner, Ito brings all of his skill as a horror genius to the table… Recommended." -Otaku USA Magazine

"Incredibly memorable…Whether you’re a die-hard Ito fan, a cat lover, or both, you will absolutely adore this manga." -Dread Central

"Junji Ito proves just as adept at capturing life with kitties as he is at horror, and the story is by turns touching, hilarious, and heartbreaking." -Anime News Network