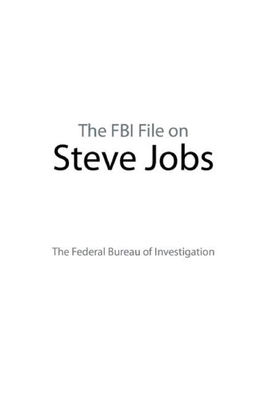 By The Federal Bureau of Investigation


Special Order—Subject to Availability
See the darker side of one of the world’s most influential businessmen.

Steve Jobs (1955–2011) was known for his business prowess, his inventiveness, and his search for perfection in both form and function. Here is the other side of one of the world’s most famous—and infamous—business and technology magnates. In 1991, Jobs was considered for an appointed position on the US President’s Export Council, a position he accepted after the FBI performed this extensive background check (totaling 191 pages).

This release consists of the FBI’s 1991 background investigation of Jobs for that position, as well as a 1985 investigation of a bomb threat against Apple. Declassified for the first time in February 2012, this is a must-have collector’s item. It includes:

Everyone with an interest in one of America’s greatest entrepreneurs will find this book revealing.

Skyhorse Publishing, as well as our Arcade imprint, are proud to publish a broad range of books for readers interested in history--books about World War II, the Third Reich, Hitler and his henchmen, the JFK assassination, conspiracies, the American Civil War, the American Revolution, gladiators, Vikings, ancient Rome, medieval times, the old West, and much more. While not every title we publish becomes a New York Times bestseller or a national bestseller, we are committed to books on subjects that are sometimes overlooked and to authors whose work might not otherwise find a home.
The Federal Bureau of Investigation is the investigative arm of the US Department of Justice. It was founded in 1908.