Nature's Mutiny: How the Little Ice Age of the Long Seventeenth Century Transformed the West and Shaped the Present (Paperback) 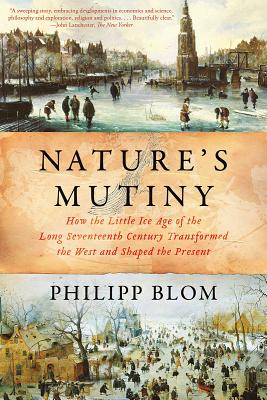 Nature's Mutiny: How the Little Ice Age of the Long Seventeenth Century Transformed the West and Shaped the Present (Paperback)

Hailed as an “arresting” (Lawrence Klepp, New Criterion) account, Nature’s Mutiny chronicles the great climate crisis of the seventeenth century that totally transformed Europe’s social and political fabric. Best-selling historian Philipp Blom reveals how a new, radically altered Europe emerged out of the “Little Ice Age” that diminished crop yields across the continent, forcing thousands to flee starvation in the countryside to burgeoning urban centers, and even froze London’s Thames, upon which British citizens erected semipermanent frost fairs with bustling kiosks, taverns, and brothels. Highlighting how politics and culture also changed drastically, Blom evokes the era’s most influential artists and thinkers who imagined groundbreaking worldviews to cope with environmental cataclysm.

As we face a climate crisis of our own, “Blom’s prodigious synthesis delivers a sharply-focused lesson for the twenty-first century: the profound effects of just a few degrees of climate change can alter the course of civilization, forever” (Laurence A. Marschall, Natural History).

The author of Fracture: Life and Culture in the West and The Vertigo Years, Philipp Blom was born in Hamburg in 1970. After studying in Vienna and Oxford, he worked in publishing as a journalist and translator in London and Paris. He lives in Vienna.