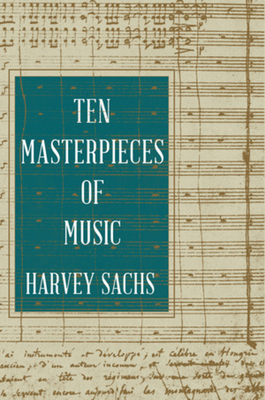 Some pieces of music survive. Most fall into oblivion. What gives the ten masterpieces selected for this book their exceptional vitality?

In this penetrating volume, Harvey Sachs, acclaimed biographer and historian of classical music, takes readers into the hearts of ten extraordinary works of classical music in ten different genres, showing both the curious novice and the seasoned listener how to recognize, appreciate, and engage with these masterpieces on a historical and compositional level.

Far from what is often thought, classical music is neither dead nor dying. As a genre, it is constantly evolving, its pieces passing through countless permutations and combinations yet always retaining that essential élan vital, or life force. The works collected here, composed in the years between 1784 and 1966, are a testament to this fact. As Sachs skillfully demonstrates, they have endured not because they were exceptionally well-made or interesting but because they were created by composers—Mozart and Beethoven; Schubert, Schumann, Berlioz, Verdi, and Brahms; Sibelius, Prokofiev, and Stravinsky—who had a particular genius for drawing music out of their deepest wellsprings. “Through music,” Sachs writes, “they universalized the intimate.”

In describing how music actually sounds, Ten Masterpieces of Music seems to do the impossible, animating the process of composing as well as the coming together of disparate scales and melodies, trills and harmonies. It tells us, too, how particular compositions came to be, often revealing that the pieces we now consider “classic” were never intended to be so. In poignant, exquisite prose, Sachs shows how Mozart, a former child prodigy under constant pressure to produce new music, hastily penned Piano Concerto No. 17 in G major, one of his finest piano concertos, for a teenage student, and likewise demonstrates how Goethe’s Faust, Part One, became a springboard for the musical imagination of the French composer Berlioz.

As Sachs explains, these pieces are not presented as candidates for a new “Top Ten.” They represent neither the most well-known nor the most often-performed works of each composer. Instead, they were chosen precisely because he had something profound to say about them, about their composers, about how each piece fits into its composer’s life, and about how each of these lives can be contextualized by time and place. In fact, Sachs encourages readers to form their own favorites, and teaches them how to discern special characteristics that will enhance their own listening experiences.

With Ten Masterpieces of Music, it becomes evident that Sachs has lived with these pieces for a veritable lifetime. His often-soaring descriptions of the works and the dramatic lives of the men who composed them bring a heightened dimension to the musical perceptions of all listeners, communicating both the sheer improbability of a work becoming a classic and why certain pieces—these ten among them—survive the perilous test of time.

Harvey Sachs is the author or coauthor of eleven books, including Toscanini and Music in Fascist Italy. He lives in New York City and is on the faculty of the Curtis Institute of Music in Philadelphia.
Sachs ... takes readers on a breezy, informative tour of classical music . . . [in] a variety of genres . . . [E]ach selection ... provides abundant cultural and historical background and significant biographical detail [of the composer's life and the larger pantheon of musical greats]. Sachs’ lively prose will draw readers in . . . Heartily recommended to every serious lover of classical music.
— Edward B. Cone - Library Journal

An astute guide compiles a stunning repertoire of works... Esteemed music critic Sachs gets personal with this effervescent homage to some favorite works of “life-giving and affirmative” classical music. He chose these pieces, all in different genres, because he felt he had “something useful to say about them,” and he deftly shows how biography informed the music, each piece neatly fitting into its time and place... This judicious compilation of biographies and analysis is a thoroughly engaging read.
— Kirkus Reviews