A Field Philosopher's Guide to Fracking: How One Texas Town Stood Up to Big Oil and Gas (Hardcover) 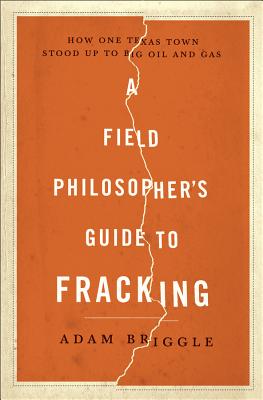 A Field Philosopher's Guide to Fracking: How One Texas Town Stood Up to Big Oil and Gas (Hardcover)

Winner of the Writers' League of Texas Book Awards

From the front lines of the fracking debate, a “field philosopher” explores one of our most divisive technologies.

When philosophy professor Adam Briggle moved to Denton, Texas, he had never heard of fracking. Only five years later he would successfully lead a citizens' initiative to ban hydraulic fracturing in Denton—the first Texas town to challenge the oil and gas industry. On his journey to learn about fracking and its effects, he leaped from the ivory tower into the fray.

In beautifully narrated chapters, Briggle brings us to town hall debates and neighborhood meetings where citizens wrestle with issues few fully understand. Is fracking safe? How does it affect the local economy? Why are bakeries prohibited in neighborhoods while gas wells are permitted next to playgrounds? In his quest for answers Briggle meets people like Cathy McMullen. Her neighbors’ cows asphyxiated after drinking fracking fluids, and her orchard was razed to make way for a pipeline. Cathy did not consent to drilling, but those who profited lived far out of harm’s way.

Briggle's first instinct was to think about fracking—deeply. Drawing on philosophers from Socrates to Kant, but also on conversations with engineers, legislators, and industry representatives, he develops a simple theory to evaluate fracking: we should give those at risk to harm a stake in the decisions we make, and we should monitor for and correct any problems that arise. Finding this regulatory process short-circuited, with government and industry alike turning a blind eye to symptoms like earthquakes and nosebleeds, Briggle decides to take action.

Though our field philosopher is initially out of his element—joining fierce activists like "Texas Sharon," once called the "worst enemy" of the oil and gas industry—his story culminates in an underdog victory for Denton, now nationally recognized as a beacon for citizens' rights at the epicenter of the fracking revolution.

Adam Briggle teaches philosophy at the University of North Texas in Denton, where he also serves on a citizens' advisory group. He contributes to Slate, Truthout, and other publications. His work and the Denton story have been featured in the New York Times, the Los Angeles Times, BBC, NPR, Washington Post, and Newsweek.
Ambitious…. Briggle excels in the abstract. His ability to apply philosophic treatises from Socrates to Hobbes to Kant to the dilemma of the oil and gas boom sweeping this country is admirable…. [He] is lucid in describing a system that by anyone’s analysis favors the rights of those who own the oil and gas beneath the ground over those who live atop it.
— James Osborne

Out of the university and into the streets, Briggle brings the practice of 'field philosophy' to the question of whether fracking is feckless or feasible…It is a fraught story, but Briggle tells it warmly and cogently, exploring both the interpersonal relationships involved and some of the geological science behind fracking.

In this blunt yet hopeful chronology, Briggle confers with scientists, engineers, policy makers, and fellow citizens to gain a broad overview of fracking…. Briggle’s philosophical framing of the conversation sets his work apart and helps provide further insight on this divisive topic.

This rousing account of a great people's victory is also the occasion for some real reflection about the mad push forward now degrading the planet in deep and desperate ways.
— Bill McKibben, author of Deep Economy

As extreme energy extraction moves next to backyards and playgrounds, where do we draw the line between reasonable risk and recklessness? You owe it to your children and your grandchildren to read this book.
— Helen Slottje, architect of the New York state fracking ban and winner of the Goldman Environmental Prize

Briggle offers a compelling look at the environmental issues and a broader look at citizen engagement in ethics and social policy.
— Vanessa Bush

Through the story of Denton and his theory of innovation, Briggle shows us how the Texas government is a subsidiary of oil and gas corporate interests, not a government 'of, by, or for the people.'
— Lon Burnham, former representative for Texas House District 90

Briggle beautifully captures how the mad rush to drill and frack this country has led to one of the fastest-growing grassroots movements in American history. When we finally ban fracking across the world, it will be because strong communities like Denton, Texas, showed us the way.
— Josh Fox, director of Gasland and Gasland 2