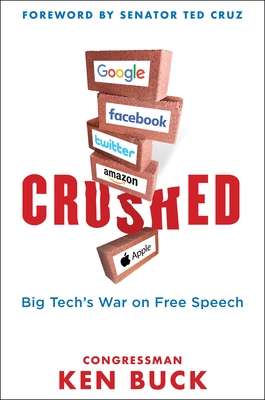 "Big Tech poses the single greatest threat to free speech and democracy in our country. My friend Ken Buck has assembled a must-read dossier that lays out the enormous dangers we face as a nation right now." -- Senator Ted Cruz

AMERICAN DEMOCRACY IS AT RISK

oligarchs having a monopoly over the marketplace of ideas, and with it, democracy itself."

-- From the Introduction to CRUSHED

When the Founding Fathers drafted our Constitution, they had no idea there would be a "Big Tech" - nor any concept of the immense power these companies would wield over our people. But the Fathers did provide mechanisms -- a system of check and balances -- for the people to stop dangerous monopolies like Google, Facebook, Apple, and Amazon from suffocating our business and political life. Few know more about these mechanisms than Rep. Ken Buck, who has been a leader in Congress fighting against the unchecked power of Big Tech.

In CRUSHED: Big Tech's War on Free Speech, Buck exposes the bullying and predatory behavior from the Big Tech giants who have used their technologies and their unbelievable market shares to stifle commerce and censor free speech. He spells out the inside details of how these companies restrict free markets, stop competition, increase prices, and ultimately hurt consumers. Even worse, Big Tech companies like Google, Twitter, and Facebook are actively censoring conservative news and views, as they openly manipulate information provided to voters. Ken Buck shows how these tech giants are true monopolies and their concentrated power pose a serious danger for our democracy.

In contrast to the robber barons of the Gilded Age who posed simply a threat to commerce, Big Tech threatens the very core of our political system. They control the flow of information shared with the public for their own financial and political gain. Finally, in CRUSHED, Ken Buck argues that while Americans are under siege by Big Tech, we are not destroyed. We can still take on Big tech, fight back and even win. The future of our nation depends on it, he says.

"This book arrives resounding like a five-alarm warning and explains the threats we face in great detail." -- Senator Ted Cruz

IT IS TIME TO FIGHT BACK

KEN BUCK is a Republican Congressman representing Colorado's 4th Congressional District. He was first elected to Congress on November 4, 2014, and is currently serving his fourth term in the United States House of Representatives.Congressman Buck is the Ranking Member on the House Judiciary Subcommittee on Antitrust, Commercial and Administrative Law. He also serves on the House Judiciary Committee and the House Foreign Affairs Committee; the Subcommittee on Immigration and Citizenship; and on the House Foreign Affairs Subcommittee on Asia, The Pacific, and Nonproliferation.Buck learned the value of hard work from his grandfather, who opened a shoe repair store in Greeley in the 1930s. One of three brothers, he worked his way through high school, college, and law school as a janitor, truck driver, furniture mover, and ranch hand.After law school, Buck worked for Congressman Dick Cheney (R-WY) on the Iran-Contra Investigation and then became a prosecutor with the U.S. Department of Justice. In 1990, he joined the Colorado U.S. Attorney's Office where he became the Chief of the Criminal Division.In 2002, Buck joined Hensel Phelps Construction Co. in Greeley as a business executive. Starting in 2004, Buck was elected Weld County District Attorney three times. He led a staff of more than sixty people with a strong record of criminal prosecution and crime prevention. Under his leadership, the crime rate in Weld County dropped 50%, one of the best records in the country.Congressman Buck is a Christian and a leader in his profession and community. He has volunteered and served on the boards of many important community groups. As District Attorney, Buck brought together community leaders to create the Juvenile Assessment Center. The Center has helped more than two thousand kids and their families get back on the right path in life.Buck's son Cody graduated from West Point and served in the U.S. Army and his daughter Kaitlin works as a business executive in Colorado.He lives & works in the Boulder, CO metro area and Washington, D.C.https: //buck.house.gov/