2 Weeks to a Younger Brain: An Innovative Program for a Better Memory and Sharper Mind (Paperback) 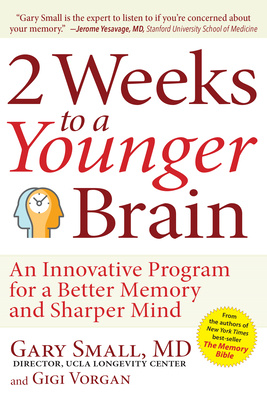 2 Weeks to a Younger Brain: An Innovative Program for a Better Memory and Sharper Mind (Paperback)

Misplacing your keys, forgetting someone's name at a party, or coming home from the market without the most important item -- these are just some of the many common memory slips we all experience from time to time. But such cognitive lapses don't just plague middle-agers and seniors; UCLA studies indicate that forgetfulness begins much earlier in life. Scientists can detect subtle changes in the brain that coincide with mental decline by the time we reach age 40, and our findings show that people as young as 20 already have memory problems.

2 Weeks to a Younger Brain will not only improve your memory, but will also strengthen your physical health by reducing your risk for diabetes, heart disease, and stroke. The latest research confirms that there is a lot we can do to boost our memory and keep our brains young. After three decades of helping thousands of patients improve their memory and mental acuity, Dr. Small and Gorgan are convinced that our daily lifestyle habits are directly linked to our brain health. This book will show that it only takes two weeks to form new habits that bolster cognitive abilities and help stave off, or even reverse, brain aging.

If you commit only 14 days to 2 Weeks To A Younger Brain, you will reap noticeable results. During that brief period, you will have learned the secrets to keeping your brain young for the rest of your life.

Dr. Gary Small, is a professor of psychiatry and director of the UCLA Longevity Center* at the Semel Institute for Neuroscience & Human Behavior. His research, supported by the NIH, has made headlines in the Wall Street Journal and the New York Times. Scientific American magazine named him one of the world's leading innovators in science and technology. Dr. Small lectures internationally and frequently appears on the Today show, Good Morning America, PBS, and CNN. He has written six books, including the New York Times best seller, The Memory Bible. Gigi Vorgan has written, produced, and appeared in numerous feature films and television projects before teaming up with her husband, Dr. Gary Small, to co-write The Memory Bible, The Memory Prescription, The Longevity Bible, iBrain, The Other Side of the Couch, and The Alzheimer's Prevention Program. She lives in Los Angeles with Dr. Small and their two children.