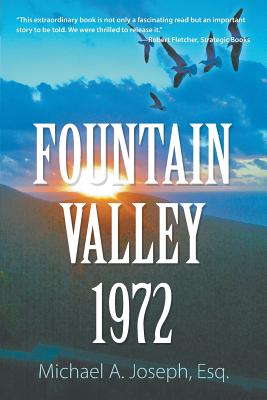 By Esq Michael a. Joseph


Not On Our Shelves—Ships in 1-5 Days
(This book cannot be returned.)
As the world's attention was focused on the massacre of Israeli athletes at the Munich Olympic Games on September 6, 1972, the Fountain Valley Golf Course in the U.S. island of St. Croix hours later was invaded by five masked gunmen. Within minutes eight people including tourists and employees lay dead. It raced around the globe as a black-on-white massacre even though in St. Croix, where we locals refer to whites as Continentals and to blacks as Yankees, America's skin color drama does not exist. Prior to the slayings, a Vietnam vet tried to kill two cops cuffing his fellow combat veteran who d stolen money for heroin to which they both became hooked while in Vietnam. The shooter got away but the hunt for him was relentless. He sought refuge in my brother's camp, where three other young men were visiting. With them he set off the Fountain Valley massacre, called one of the most vicious crimes in the annals of Western civilization. The four were clueless to the vet's scheme to make the killing appear to be racially motivated. All five were captured, tortured, and sentenced to eight consecutive life terms. In 1984 the vet convict escaped by hijacking an airliner into Cuba where he remains today. In 1994 my brother Rafie was released based on his rehabilitation such as tutoring hundreds of prisoners to achieve their GEDs. Because the killings were publicized as a black-on-white crime, his freedom was bitterly protested and caused a Continental prosecutor to block Rafie's admission to the University of California at Santa Cruz doctorate program. Besides, he was blackballed from paraprofessional work. So, Rafie committed suicide. While a conventional page turner could ve easily been written from this harrowing story, an erudite and poetic journey takes the reader into a larger context, embracing a scholarly overview of U.S. racism. Even in Part Two's exposition of the true-crime and family sagas, it rejects conventional linear narrative in favor of a sometimes dream-like and suggestive style that reveals key facts along the way. I highly commend this rich and absorbing book for its insights. Peter Goldberger, Third Circuit Bar President The concerns in this book are of global scope. Prof. Dannabang Kuwabong, UPR Publisher's website: http: //sbprabooks.com/MichaelAJoseph.