Pelé: The King of Soccer (Paperback) 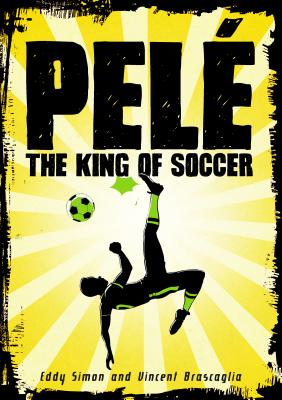 Pelé: The King of Soccer (Paperback)

Edson Arantes do Nascimento, known to his schoolmates as Pelé, grew up in poverty in the Sao Paulo region of Brazil. He was too poor to afford a real soccer ball, so he played with a ball of newspaper tied together with string. Yet he dominated the youth leagues and signed his first professional soccer contract at the age of fifteen. Within two years he was celebrated internationally, when he led Brazil to victory at the world cup. Known by his fans as "O Rei" (The King), Pelé is widely regarded as the greatest soccer player of all time. But he's more than just an athlete: he also traveled the world as goodwill ambassador for UNICEF. Pelé is the living symbol of a sport he dubbed "the beautiful game"—a game that brings people together regardless of race or nationality.

In the graphic novel Pele: The King of Soccer, Eddy Simon and Vincent Brascaglia beautifully depict Pele's rise from the slums of Brazil to the national stage.

Eddy Simon has written for several newspapers and started to write graphic novels in 2016. His comics books have been published by several french editors and some have been translated to foreign countries. He is the author of Pelé.

Vincent Brascaglia began his career by illustrating school books. He was first published in magazines, then started to work on Pelé. Today, he continues his illustration work and has taken on some new graphic novel projects.

"The artwork is active and graceful—occasionally frenetic, depicting what Pelé called “the beautiful game.” A great addition for graphic novel collections and a good way to attract reluctant readers."—School Library Journal

"Appealingly energetic, this should have a wide appeal, even beyond soccer fans—an easy win." —Booklist