A First Time for Everything (Hardcover) 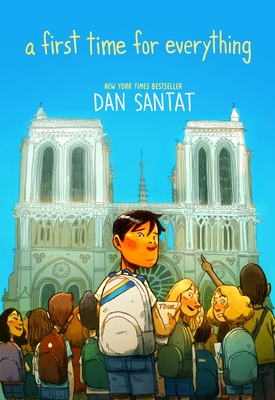 A First Time for Everything (Hardcover)

A middle grade graphic memoir based on bestselling author and Caldecott Medalist Dan Santat's awkward middle school years and the trip to Europe that changed his life.

Dan's always been a good kid. The kind of kid who listens to his teachers, helps his mom with grocery shopping, and stays out of trouble. But being a good kid doesn't stop him from being bullied and feeling like he's invisible, which is why Dan has low expectations when his parents send him on a class trip to Europe.

At first, he's right. He's stuck with the same girls from his middle school who love to make fun of him, and he doesn't know why his teacher insisted he come on this trip. But as he travels through France, Germany, Switzerland, and England, a series of first experiences begin to change him—first Fanta, first fondue, first time stealing a bike from German punk rockers... and first love.

Funny, heartwarming, and poignant, A First Time for Everything is a feel-good coming-of-age memoir based on New York Times bestselling author and Caldecott Medal winner Dan Santat's awkward middle school years. It celebrates a time that is universally challenging for many of us, but also life-changing as well.

Praise for After the Fall

“The author gives wings to both his protagonist and his message about the importance of getting back up after a fall and the realization that recovering from a trauma takes time.” —Booklist, starred review

Dan Santat is the Caldecott Medal–winning and New York Times–bestselling author and illustrator of The Adventures of Beekle: The Unimaginary Friend and the road trip/time travel adventure Are We There Yet? His artwork is also featured in numerous picture books, chapter books, and middle-grade novels, including Dav Pilkey's Ricky Ricotta series. Dan lives in Southern California with his wife, two kids, and many, many pets.