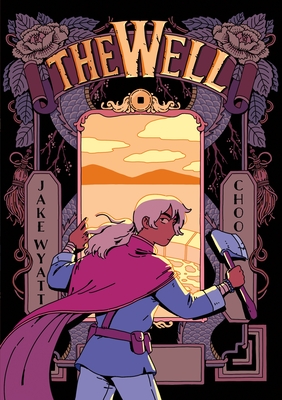 A fantasy graphic novel about Lizzy, a girl who gets cursed by a wishing well, and her adventure to grant three wishes in order to break free.

Li-Zhen’s life on the archipelago is simple. Known to friends and family as Lizzy, she takes care of her grandfather and their goats, she flirts with the woman who helps row the ferry, and she stays away from the fog that comes in the night—and the monsters hiding within it.
But Lizzy’s life comes apart when she steals a handful of coins from a sacred well to cover a debt. The well requires repayment, but it doesn’t deal in coins. It needs wishes, and its minions will drown Lizzy in its depths if she doesn’t grant them. Lizzy finds herself on a quest to uncover hidden memories, bestow great wealth, and face the magical secrets that nearly destroyed her family—and are now returning to threaten everything she has ever known.

In this breathtaking graphic novel, Jake Wyatt and Choo have created a modern fable based on magic and family secrets, exploring the power—and limits—of wishes.

Jake Wyatt lives outside Los Angeles with the love of his life, Kathryn, and their son. He writes, draws, and produces television for a living. He is the author of Necropolis (Image Comics), and has written and drawn for film, television, and comics (such as Marvel Comics’ Ms. Marvel, Cartoon Network’s Adventure Time, and Nickelodeon’s TMNT). He writes and draws comics in particular, because he loves them. He enjoys hiking, rowboats, forests, and the company of animals. He thanks you for bothering to read this book, and wishes you good fortune.

Choo is an illustrator and comic artist based in Melbourn, Australia. She has done illustration work for Lumberjanes. Choo is also a horror enthusiast, and struggling bread baker.

"With captivating artwork and a compelling adventure that has surprising depth, this is a top pick for teen readers who liked Tillie Walden’s On a Sunbeam." —Booklist, starred review

"There’s a timelessness to this story as the weight of family secrets, the desire to change a life through wishes, and the magic of tapping one’s own strengths are themes that echo backward and forward across humanity." —The Bulletin of the Center for Children’s Books, starred review

"Wyatt enlivens classic fantasy tropes and themes through the lens of a tenacious heroine whose rapidly expanding worldview and patchy memories of her complicated past build toward a poignant resolution through a compact, immersive narrative." —Publisher's Weekly, starred review