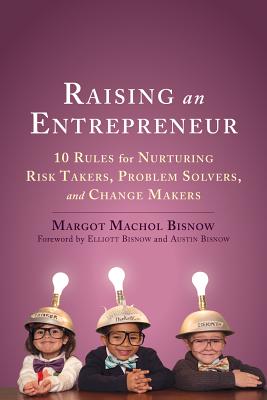 In this book, a political powerhouse and mother of two thriving entrepreneurs interviews the moms of over fifty of today's most successful innovators and--based on her findings--provides ten rules for raising confident, fearless, self-made individuals whose ideas and drive will change the world.

Is your child passionate about something? Maybe it's music, sports, theatre, writing, building things, or helping others--the kind of creative pursuits that create distinguished leaders and make change in the world. All parents want their kids to have success, but how do you help them cultivate their talent and vision for a personally fulfilling and financially successful life? Once you've recognized their drive and passion, how do you set your little trailblazers free?

Raising an Entrepreneur presents seventy-six stories from the mothers of some of the most successful entrepreneurs today. Entrepreneurs are the new rock stars--they're the ones who turn their passions into ingenious projects, because they're willing to risk failure to make their dreams come true. Highlighting the various achievements of innovators from a wide range of cultural and socioeconomic backgrounds--such as Geek Squad's Robert Stephens and Nantucket Nectars' Tom Scott, nonprofit founders like Mama Hope's Nyla Rodgers and Pencils of Promise's Adam Braun, profit for purpose creators like TOMS Shoes' Blake Mycoskie and FEED Projects' Ellen Gustafson, activists like Mike de la Rocha and Erica Ford, and artists like actress Emmanuelle Chriqui and songwriter Benny Blanco--and with photos of the entrepreneurs as children, these inspirational interviews will provide guidance and support on nurturing your own change maker.

Not every kid will be an entrepreneur, but all kids have something that makes them unique. If you're seeking a way to nurture your children's passions and help them harness their talent, drive, and grit into a fulfilling life purpose, this book is for you. With these ten rules and numerous inspiring stories, you'll gain confidence in raising your child into a creatively successful adult.


Margot Machol Bisnow is a writer, wife, and mom from Washington, DC. She spent twenty years in government, including as an FTC Commissioner and Chief of Staff of the President's Council of Economic Advisers, and eight years writing a popular daily online social newsletter. Her son Austin has written successful pop songs and started the popular band Magic Giant. Her son Elliott founded Summit Series, a noted international conference series for millennial entrepreneurs, and led the purchase and development of Powder Mountain ski resort in Utah as a permanent home for their community. Her husband, Mark Bisnow, founded a national newsletter company, Bisnow Media, which was acquired in 2016. Their dog is the only one in the family who gets enough sleep. Elliott Bisnow founded Summit Series, which has hosted thousands of young entrepreneurs at frequent events, and whose philosophy is that good business should be good for the world; Forbes called it "The Davos of Generation Y." Summit is an investor in Uber, Warby Parker, and change.org, and has spearheaded philanthropic efforts that include building a seventy-one-square-mile marine-protected area in the Bahamas. Elliott cofounded Bisnow Media, which was acquired in 2016, and served on the United Nations Foundation Global Entrepreneurs Council. Austin Bisnow is the lead singer of Magic Giant, the Los Angeles-based folk revival band known for anthem-like sing-alongs and euphoric live experiences, whose single "Set On Fire" charted #4 on Spotify's US Viral 50. He is also an accomplished songwriter and producer who has worked with artists, including John Legend, will.i.am, David Guetta, and Steve Aoki. Austin and his brother Elliott teamed with Grammy-winning producer Benny Blanco to cofound the Get Well Soon Tour, a nonprofit that raises the spirits of hospitalized children across America.