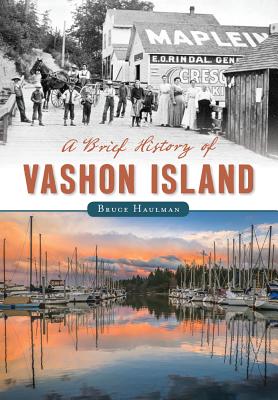 
Special Order—Subject to Availability
Reachable only by ferry, Vashon Island is a breathtaking rural retreat from the bustling activity of nearby Seattle and Tacoma. The island's first inhabitants, the sx̌ʷəbab, took advantage of its evergreen forests and rich marine resources. In 1792, George Vancouver was the first Anglo to discover the island and named it after Captain James Vashon. By the late 1800s, the first white settlers had established farms and greenhouses that supplied nearby cities with berries, tomatoes and cucumbers. Ferries drove development in the later half of the century, introducing new industries and tourism to the area. While both influenced by and isolated from the mainland, the island developed its own unique character treasured by locals. Merging human and natural history, author Bruce Haulman presents the rich heritage of this thriving community.