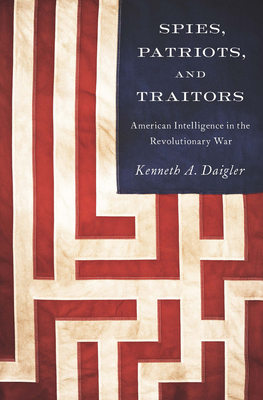 By Kenneth A. Daigler

Students and enthusiasts of American history are familiar with the Revolutionary War spies Nathan Hale and Benedict Arnold, but few studies have closely examined the wider intelligence efforts that enabled the colonies to gain their independence. Spies, Patriots, and Traitors provides readers with a fascinating, well-documented, and highly readable account of American intelligence activities during the era of the Revolutionary War, from 1765 to 1783, while describing the intelligence sources and methods used and how our Founding Fathers learned and practiced their intelligence role.

The author, a retired CIA officer, provides insights into these events from an intelligence professional's perspective, highlighting the tradecraft of intelligence collection, counterintelligence, and covert actions and relating how many of the principles of the era's intelligence practice are still relevant today. Kenneth A. Daigler reveals the intelligence activities of famous personalities such as Samuel Adams, George Washington, Benjamin Franklin, Nathan Hale, John Jay, and Benedict Arnold, as well as many less well-known figures. He examines the important role of intelligence in key theaters of military operations, such as Massachusetts, New York, New Jersey, Pennsylvania, and in General Nathanael Greene's campaign in South Carolina; the role of African Americans in the era's intelligence activities; undertakings of networks such as the Culper Ring; and intelligence efforts and paramilitary actions conducted abroad.

Spies, Patriots, and Traitors adds a new dimension to our understanding of the American Revolution. The book's scrutiny of the tradecraft and management of Revolutionary War intelligence activities will be of interest to students, scholars, intelligence professionals, and anyone who wants to learn more about this fascinating era of American history.

Kenneth A. Daigler is a retired career CIA operations officer. He has a BA in history from Centre College of Kentucky and an MA in history from the Maxwell School at Syracuse University and has served in the US Marine Corps. He has written articles about intelligence for the CIA Historical Division's journal Studies in Intelligence, the Association of Former Intelligence Officers' Intelligencer, and other publications.