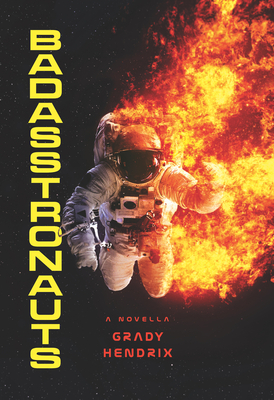 
Not On Our Shelves—Ships in 1-5 Days
From New York Times bestselling author of My Best Friend's Exorcism, The Southern Book Club's Guide to Slaying Vampires, and The Final Girl Support Group, Grady Hendrix takes a break from horror and goes all-in on sci-fi in this novella about backyard rocket jockeys trying to get into low earth orbit.

Melville, South Carolina was out of money, it was out of jobs, it was out of hope, and today it was out of astronauts. There were only two to begin with, and now one is stuck on the abandoned International Space Station after his mission went south. With NASA’s budget cut to the bone, there’s no one to bring him back home, so everyone is only too happy to ignore this embarrassing sign of American Failure and just let him die. But his cousin, Walter Reddie, isn’t going to let that happen.

Tanked on vodka, living on a “farm” whose only crop is cars on cinderblocks, Walter's a wash-out from the Shuttle Program and he’ll be damned if he’s going to let his cousin die in the sky like a dog. And so he begins to build a rocket. If America won’t rescue its astronauts, he’ll do it himself.

Violating numerous laws, good taste, common sense, logic, and reason, Walter becomes a lightning rod for people who aren’t ready to give up. His farm is transformed into the promised land for misfits, drifters, rocket junkies, pyromaniacs, dreamers, science nerds, and astro-hippies who believe that space shouldn’t just be for billionaires. But it won’t be easy. Chances are good they’ll blow themselves up, get arrested, or kill each other before they ever get into orbit.
Grady Hendrix is an award-winning novelist and screenwriter living in New York City. His books include Horrorstör, about a haunted IKEA, My Best Friend's Exorcism, We Sold Our Souls, and the New York Times bestseller, The Southern Book Club's Guide to Slaying Vampires. He's also the author of the non-fiction book, Paperbacks from Hell, a history of the horror paperback boom of the '70s and '80s, and his screenplays include Mohawk (2017) and Satanic Panic (2019).