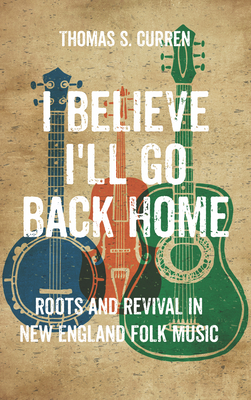 
In Stock—Click for Locations
Between 1959 and 1968, New England saw a folk revival emerge in more than fifty clubs and coffeehouses, a revolution led by college dropouts, young bohemians, and lovers of traditional music that renewed the work of the region's intellectuals and reformers. From Club 47 in Harvard Square to candlelit venues in Ipswich, Martha's Vineyard, and Amherst, budding musicians and hopeful audiences alike embraced folk music, progressive ideals, and community as alternatives to an increasingly toxic consumer culture. While the Boston-Cambridge Folk Revival was short-lived, the youthful attention that it spurred played a crucial role in the civil rights, world peace, and back-to-the-land movements emerging across the country.

Fueled by interviews with key players from the folk music scene, I Believe I'll Go Back Home traces a direct line from Yankee revolutionaries, up-country dancers, and nineteenth-century pacifists to the emergence of blues and rock 'n' roll, ultimately landing at the period of the folk revival. Thomas S. Curren presents the richness and diversity of the New England folk tradition, which continues to provide perspective, inspiration, and healing in the present day.
THOMAS S. CURREN is chairman of the board of Folk New England and executive director of the Franklin Land Trust.
“The author covers the folk scene with diligent analysis, an archivist’s eye for detail, and anecdotes aplenty, capturing the imagination and engaging the intellect . . . Curren’s work is both historically important and vital reading for the present moment. Our need for a spiritual and cultural revival is, it would seem, as essential and natural as our need to sing. Highly recommended.”—Library Journal

"[A]uthor Thomas S. Curren pairs an evident love for traditional music and the region, detailing the figures and the history of the folk movement in Boston and Cambridge in the early 1960s . . . It's an accessible history of a region and a moment in music."—Boston Globe

"Accessibly written by a knowledgeable and esteemed author, I Believe I'll Go Back Home does a good job of taking the reader on a journey along the ethnic origins of folk music that have absorbed into our culture."—John Kane, author of The Last Seat in the House: The Story of Hanley Sound