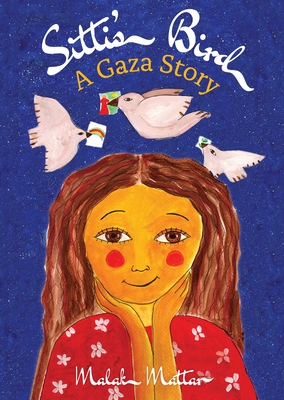 
On Our Shelves Now at:
A sensitive and heart warming story of how a little girl in Gaza finds strength and hope through her painting. Sitti's Bird is a unique children’s picture book, written and illustrated by Palestinian artist, Malak Mattar, reflecting her experiences of childhood in Palestine.

Malak is a little girl who lives in Gaza with her parents. She goes to school, plays in the ocean, and visits Sitti’s house on Fridays. One day while she is in school, bombings begin. She spends the next 50 days at home with her parents worrying and feeling scared, until one day she picks up her paintbrush …

Sitti’s Bird: A Gaza Story is a unique children’s picture book, written and illustrated by Palestinian artist, Malak Mattar. Reflecting her experiences of childhood in occupied Palestine, Malak’s story brings warmth and wonder to children as it tells of her rebirth as an artist during the 2014 airstrikes on Gaza. It is the story of a young girl whose love for her family and discovery of art help her channel her fears and overcome traumas that few of us can imagine—traumas shared by countless children in Gaza and around the world.
Malak Mattar is a Palestinian artist from Gaza. She began painting at age 13, during the 51-day Israeli military assault on Gaza in 2014. Unable to leave Gaza, she built up a reputation for her artwork through social media, garnering attention from around the world. Now Malak’s art has been featured in exhibitions in the U.S. and Europe. Sitti’s Bird is her first book.
“Children's books—particularly picture books—that tackle the subject of war in sensitive and reassuring ways are rare ... In Sitti’s Bird: A Gaza Story, the Palestinian painter Malak Mattar creates a slice-of-life narrative that explores how painting helped her overcome the fear and isolation she experienced during Israel’s invasion of Gaza in 2014. The tension between Mattar’s naïve, fanciful paintings and her naturalistic, moment-by-moment storytelling underscores the value of creativity during times of crisis.”
— The New York Times Book Review, "Teaching Young Children About War Without Frightening Them"