Dance or Die: From Stateless Refugee to International Ballet Star A MEMOIR (Hardcover) 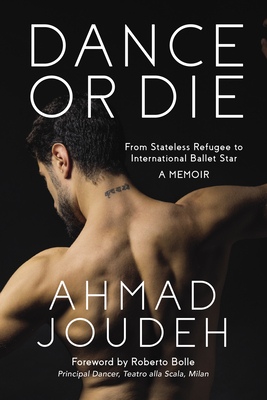 Dance or Die: From Stateless Refugee to International Ballet Star A MEMOIR (Hardcover)


In Stock—Click for Locations
A Syria-born dancer offers his deeply personal story of war, statelessness, and the pursuit of the art of dance in this inspirational memoir.

DANCE OR DIE is an autobiographical coming-of-age account of Ahmad Joudeh, a young refugee who grows up in Damascus with dreams of becoming a dancer. When he is recruited by one of Syria’s top dance companies, neither bombs nor family opposition can keep him from taking classes, practicing hard, and becoming a Middle Eastern celebrity on a Lebanese reality show. Despite death threats if Ahmad continues to dance, his father kicking him out of the house, and the war around him intensifying, he persists and even gets a tattoo on his neck right where the executioner's blade would fall that says, "Dance or Die."

A powerful look at refugee life in Syria, DANCE OR DIE tells of the pursuit of personal expression in the most dangerous of circumstances and of the power of art to transcend war and suffering. It follows Ahmad from Damascus to Beirut to Amsterdam, where he finds a home with one of Europe's top ballet troupes, and from where he continues to fight for the human rights of refugees everywhere through his art, his activism, and his commitment to justice.
Dancer and choreographer Ahmad Joudeh was born in Syria in 1990 and grew up as a stateless refugee in the Al-Yarmouk camp on the outskirts of Damascus. Amid the violence of the Syrian civil war, he pursued his dream as a dancer and appeared on the Middle Eastern version of So You Think You Can Dance before moving to Europe in 2016 to dance with the Dutch National Ballet. He lives in Amsterdam and performs throughout the world.