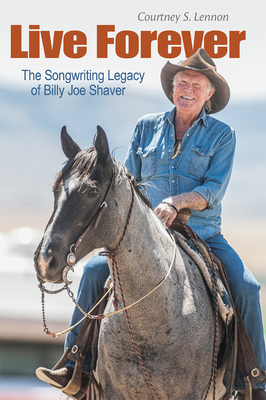 Billy Joe Shaver wrote nine of the ten songs included on Waylon Jennings’s landmark album Honky Tonk Heroes and played a dominant role in the origins and development of the Outlaw Country movement of the 1970s. He has been named by Ray Wylie Hubbard, alongside Townes Van Zandt and Guy Clark, as a member of the “holy trinity” of Texas songwriters. He has exerted a Texas-sized influence on Texas music and especially Texas singer-songwriters, and is cited as a chief inspiration by at least two generations of artists. But although his influence has been profound, Shaver has the dubious honor of becoming, according to author Courtney S. Lennon, “country music’s unsung hero.”

In Live Forever: The Songwriting Legacy of Billy Joe Shaver, Lennon seeks to give Shaver the recognition his prolific output deserves. She unfolds for readers the complexity and the simplicity of the artist who wrote the songs that Brian T. Atkinson, in his foreword, calls “peaceful and pure, complex and convoluted, mad and merciful”—the musician who wrote “You Just Can’t Beat Jesus Christ” and “That’s What She Said Last Night,” “Honky Tonk Heroes,” and “Get Thee Behind Me Satan.” Based on in-depth interviews with a host of notable singer-songwriters, this book reveals and celebrates the saint and the sinner, the earthy intellectual and the hard-drinking commoner, the poet and the cowboy.

COURTNEY S. LENNON is the founder and editor of Turnstyled Junkpiled, an online roots music magazine, and has contributed to No Depression, Lone Star Music Magazine, and Texas Music Magazine. She resides in Buffalo, New York.

“Live Forever: The Songwriting Legacy of Billy Joe Shaver details the rough and rowdy life of renowned singer-songwriter, Billy Joe Shaver, as it captures the magic, wonder, and intensity of the always-on-the-edge troubadour, who is in a league with fellow friend and outlaw Townes Van Zandt. Throughout the book, author Courtney S. Lennon not only pays close attention to Shaver’s musical legacy, but she also presents his humanity, empathy, and faith. You feel and hear the words. A must for all to read.”—Harold F. Eggers Jr., author of My Years with Townes Van Zandt: Music, Genius and Rage
— Harold F. Eggers Jr

"Shaver’s fans will love Live Forever: The Songwriting Legacy of Billy Joe Shaver because they get to listen in on the stories that his friends and other musicians tell about him. Lennon’s book also serves as an excellent introduction to Shaver’s music. Her book goes a long way toward winning recognition that Shaver deserved but never received in his life."
— No Depression