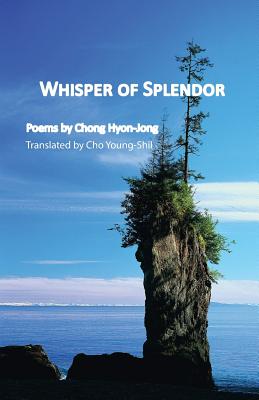 Whisper of Splendor brings about 60 poems from the author to demonstrate his poetic ideals and art. In the book, the reader notes the persona's propensity to take away the tangled web of meanings that packs his consciousness, so that he can take in things as they are, as they move. Declining to translate things from outside and thereon to construct their complicated meanings, Chong now relies on his intense vision in crafting a new poetry. He has become a realist of vision.
The mind's eye--the inner waves--transports him to tomorrow morning, where the heart dawns and Time blossoms full, despite the ills of the modern world. Interlaced with aesthetic quest, philosophical knowledge, longing for robust humanity, his poems are poignantly beautiful, visionary and often--humorous.

Chong Hyon-Jong was born in Seoul, Korea, in 1939, graduated from Yonsei University with a major in philosophy, and made his debut as a poet through "Hyondae Munhak" in 1965. His poetry books include The Dream of Things, Call Me Mr. Star, Like a Ball Bouncing upon Falling, Not Much Time to Love, A Flower, The World's Trees, Thirst as Well as a Fountain, and Can't Bear It. He also translated several literary books into Korean.

Cho Young-Shil is the translator of three Korean poetry collections: One Day, Then Another by Kim Kwang-Kyu (White Pine Press, 2013), A Warm Family by Kim Hu-Ran (Codhill Press, 2014), A Lion at Three in the Morning by Nam Jin-Woo (Homa & Sekey Books, 2017). She wrote Flowers Going to Seeds, a book of poems in memoriam of her mother (1908-2001), and in her spare time writes poems for young adults.