Henry and Glenn Forever and Ever (Henry & Glenn #2) (Paperback) 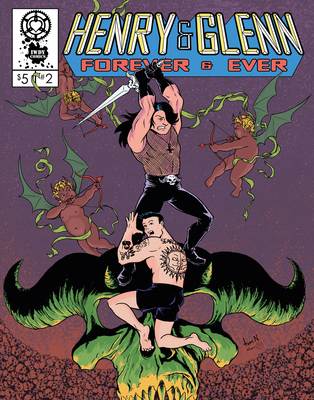 Henry and Glenn Forever and Ever (Henry & Glenn #2) (Paperback)

This is book number 2 in the Henry & Glenn series.

In the latest installment of the greatest love story ever told, Glenn's mother, freshly unearthed from beneath the bricks, moves in with him and Henry. Without giving too much away, Glenn's mommy issues come to the surface as she critiques his art, replaces his wardrobe, scrubs their dungeon, and recalls his childhood. Glenn tries to sell his signature to a UPS driver, takes a punch, and has some daydreaming adventures with a plunger. Henry, a loud guy with a good work ethic, shows his darker side and indifference to a fan as he drinks black coffee and bonds with Glenn over their distaste for their own bands; two men who suffer best alone together. Additional pin up art by Andy Belanger, Katie Skelly, and Tom Scioli. Darkest and best issue yet.
Tom Neely is a painter and cartoonist living in Los Angeles. He is best know for the cult-hit indie comic book Henry and Glenn Forever, which he created with his artist collective the Igloo Tornado, whom were voted LA Weekly's Best People in LA 2011. His art has been featured in galleries in California and New York, in dozens of magazines and literary journals and on album covers. His debut graphic novel, The Blot, earned him an Ignatz Award and made it onto several of the industry's "Best of 2007" lists as well as The Comics Journal's Best Graphic Novels of the decade 2000-2010. He authored the Melvins comic book, Your Disease Spread Quick, and a collection of comic strip poems called Brilliantly Ham-fisted. His most recent painted novel, The Wolf, was released in 2011 to critical acclaim. He is currently working on a new mini series continuing the story of Henry and Glenn Forever and Ever, as well as making plans for his next graphic novel, The Devil.