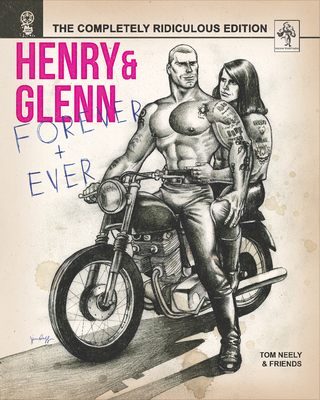 The definitive collection of the popular cult-classic series Henry & Glenn Forever & Ever Two men. Two myths. One legend. The greatest love story ever told has finally been released in graphic novel form, featuring 20 short stories about the domestic life of Henry and Glenn and sometimes their neighbors Daryl and John. Glenn deals with issues with his mother while Henry, a loud guy with a good work ethic, shows his darker side and indifference to a fan as he drinks black coffee and bonds with Glenn over their distaste for their own bands. These are two men who truly suffer best together. This book collects four serialized comics, adds even more never-before-published pages than previous collective edition, and will have a spiffy hardcover. This collection does not include Henry & Glenn Adult Activity and Coloring Book, which will be concurrently published this year.

Tom Neely is an artist and cartoonist who is best known for the cult-hit indie comic book Henry & Glenn Forever, which he created with his artist collective The Igloo Tornado. His art has been featured in galleries in California and New York, in dozens of magazines and literary journals, and on album covers. His debut graphic novel The Blot earned him many accolades, including an Ignatz Award. His other works are: Henry & Glenn Forever & Ever, Your Disease Spread Quick, The Wolf, and The Humans. He currently lives in Los Angeles.