Henry and Glenn Forever and Ever (Henry & Glenn #3) (Paperback) 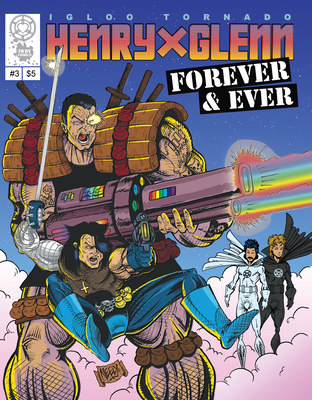 Henry and Glenn Forever and Ever (Henry & Glenn #3) (Paperback)

This is book number 3 in the Henry & Glenn series.

In the next installment of the greatest love story ever told, Glenn's mother is still living with him and Henry, until Glenn runs away. Henry, John, and Darryl comb a dozen familiar LA institutions to reunite our lovers. After being reunited during a karaoke parody of one of Glenn's songs, Henry and Glenn get their flu shots before the tragic events of Justin Hall's (No Straight Lines) story of Henry and Glenn Go To Gaydes. In this laugh-out-loud funny adventure many jokes are offered to longtime fans of our heroes and their musical pasts. Gaydes is, of course, ruled by Freddy Mercury who takes pity on Glenn and allows him one chance but he must never look back Can Glenn do it? Will our lovers continue to frustrate, inspire, and show us the way? Additional art by Shaky Kane, Jeremy Owen, Beth Dean, Rafer Roberts, Grant Reynolds, and Alex Chiu.

Tom Neely is a painter and cartoonist living in Los Angeles. He is best know for the cult-hit indie comic book Henry and Glenn Forever, which he created with his artist collective the Igloo Tornado, whom were voted LA Weekly's Best People in LA 2011. His art has been featured in galleries in California and New York, in dozens of magazines and literary journals and on album covers. His debut graphic novel, The Blot, earned him an Ignatz Award and made it onto several of the industry's "Best of 2007" lists as well as The Comics Journal's Best Graphic Novels of the decade 2000-2010. He authored the Melvins comic book, Your Disease Spread Quick, and a collection of comic strip poems called Brilliantly Ham-fisted. His most recent painted novel, The Wolf, was released in 2011 to critical acclaim. He is currently working on a new mini series continuing the story of Henry and Glenn Forever and Ever, as well as making plans for his next graphic novel, The Devil.